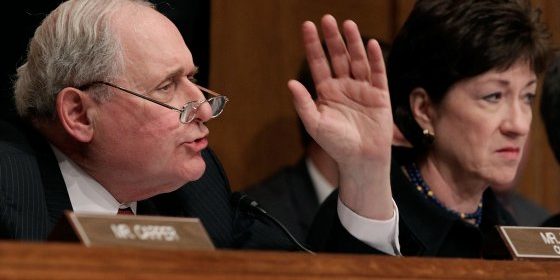 Last night’s announcement of Senator Carl Levin’s retirement was notable for the vitriol it inspired among Michigan’s right-wing. Not all of them – Attorney General Bill Schuette praised Sen. Levin’s “distinguished and honorable career,” and Gov. Snyder said “his service on behalf of Michigan and America is commendable.” But the statement from the Michigan Republican Party was startling in the way it could have been about any Democrat, and echoed many of the attacks on Sen. Stabenow from last year’s election. MRP Chairman Schostak railed against “the lack of leadership and failed policies” from Senate Democrats, and didn’t even mention Sen. Levin’s name.

The response from conservatives on social media was in kind. “About time” and “he hasn’t done anything,” they whined, exposing a major flaw with the conservative movement in Michigan – their wholesale dependence on the Republican Party for their existence. The utter lack of class or respect from right-wingers is because Levin is a Democrat, Obama is a Democrat, ergo Levin is bad. QED. Full stop.

It was way back in the fog of early 2009, but the Tea Party ostensibly started to rail against the bank bailouts and inappropriate behavior by rich CEOs. By that measure Sen. Levin should have been the Tea Party’s favorite Democrat. In honor of Levin’s inspiring career as a warrior for working people, we’ve posted a couple video highlights of Carl Levin grilling dishonest Wall Street investment bankers in the wake of the financial collapse:

So long, Sen. Levin. Michigan will miss you, but Wall Street certainly won’t.