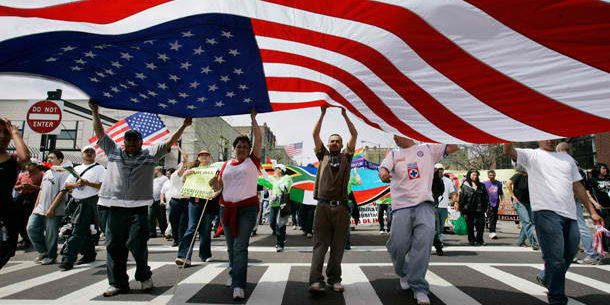 On Wednesday, April 10, a historic march will take place in Washington D.C.  It will be historic in part because it’s coming on the heels of the growing momentum for serious, common sense, immigration reform.  For the first time in decades, there is bipartisan agreement that the U.S. immigration system is broken and there is unprecedented support to actually fix it.  But, one person’s fix is another’s failure and the devil is always in the details.

Thousands will converge on the nation’s capital Wednesday April 10 to end the nightmare of separations and deportations that are breaking up immigrant families and and damaging communities.

The biggest problems with the system are connected:  (1) it takes way too long to process people who want be citizens and that contributes to the second problem, (2) the tearing apart of families and their communities.  When politicians talk about “going to the back of the line” what they don’t say is that moving through the line can take decades. During that time, children grow up without parents, spouses are separated and workers are exploited by unscrupulous employers.

The immigration process needs to be humanized.  People who want to be citizens should be able to do so in much less than a generation.  Workers shouldn’t be stuck in the shadows of a broken system featuring starvation wages and bad working conditions that some employers use to lower the bar for all workers.  Families shouldn’t be torn asunder because of bureaucracy. While this seems like a no-brainer, there are politicians in Michigan and across the nation that would block the opportunity for hard working students, parents and employers to come out of the shadows and contribute to the state’s economy without fear.

To find out how hundreds of your fellow Michiganders are on the move for justice, follow this link to find out about the April 10 for Immigration Reform April 10 in Washington DC Unite for Citizenship & Keeping Families Together.