A Banner Day for Republicans 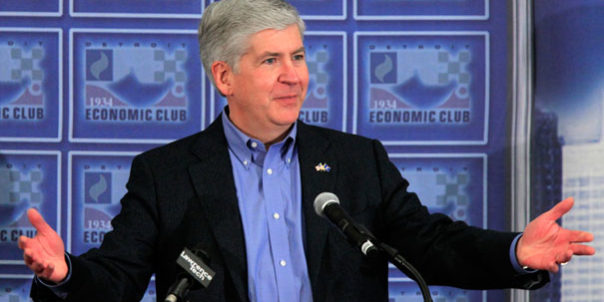 This morning started with an op-ed from Speaker Jase Bolger about how despite the stagnant unemployment rate and the refusal of Lansing Republicans to fix our roads and invest in education, Michigan is “The Comeback State!” Unfortunately for Republican politicians, it was all downhill from there.

The story of Detroit’s new Emergency Manager’s unpaid taxes reached its fourth day, with no clear explanation from Gov. Snyder’s office as to how they didn’t do a 90-second Internet search. Kevyn Orr still refuses to take responsibility for not paying thousands in unemployment taxes, blaming his accountant, and Gov. Snyder whined about wanting to “move forward.” The Detroit News continued to raise questions about the scandal, talking to a Maryland tax attorney who said nearly $16,000 in child care taxes just doesn’t make sense:

“That’s an awful lot of taxes for a baby sitter. Are you sure he’s not running a day care?” joked Maryland tax attorney Jeffrey Katz.

He said the numbers don’t add up. In Maryland, unemployment taxes are capped at about $1,150 a year per employee, Katz said, so Orr would have to go through more than five baby sitters in one year to reach $6,500 in back taxes for one year.

“There has to be a different explanation,” Katz said.

Meanwhile, in Lansing, a House committee passed a provision meant to punish the state’s public universities for passing contracts before right-to-work took effect. Of course, the universities’ actions were completely legal and responsible, or else Republican politicians would be able to hold them accountable without contorting the budget process. Instead, they are attempting to strip $41 million in funding from the University of Michigan and $27.5 million from Wayne State University. The deputy director of the nonpartisan House Fiscal Agency said “there has never been labor-related language added to higher education performance funding benchmarks.” If you’re keeping score at home, that’s probably not a good indication that the maneuver is legal. In another piece of the funding bill that Gov. Snyder has called unconstitutional in the past, they’re attempting to force universities to report to the Legislature on life-saving stem cell research. Now that’s relentless positive action.

A report also appeared in the Detroit News today revealing that in the first year since Republicans successfully repealed Michigan’s motorcycle helmet law, motorcycle deaths jumped from five in 2011, to 55. This should come as no surprise, as numerous studies have found that motorcycle deaths rise after a state allows riders to ditch their helmets. In response to this, the president of the motorcycle advocacy group ABATE of Michigan said  “we consider this a wash.”

Despite all that bad news, we can be sure that Lansing Republicans will keep pushing their agenda forward, even if they won’t tell us what that agenda is. In 2010, none of them ran for office on taking over cities, or right-to-work, or attacking stem cell research, or repealing the motorcycle helmet law. Maybe one of these days Speaker Bolger will let us know what any of that has to do with “Michigan’s Comeback.”