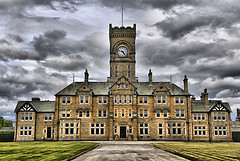 The inmates are taking over the asylum.

In a big and incredibly under-reported story that some of us who count tea bags have been predicting for weeks now, the far right tea party caucus of the Michigan Republican Party is taking over.

Thousands of cranky “tea party” types showed up at Republican County Conventions Thursday in large numbers and appear to be close to having effective control of the Michigan Republican Party.

According to the MIRS news service, the first victim of the tea party takeover may be Michigan GOP Chair Ron Weiser who thoroughly dissed and reportedly denied a delegate spot at the state Republican Convention, scheduled for Aug. 28 in East Lansing.

Someone was keeping score for the Tea Party folks in Washtenaw County. According to the leaders of the Willow Run Tea Party Caucus, the Ann Arbor Patriots and Campaign for Liberty, the Tea Party swept the 15th Congressional District and gained a two-thirds majority in the 7th District in the delegate election.

The Tea Partiers claim to have defeated Michigan Republican Party Chair Ron WEISER in his bid to become a delegate, relegating him as an alternate.

“It was a costly oversight for chairman Weiser to gaze through us as if we were not there,” said Dennis MOORE, director of the Willow Run Tea Party Caucus. “Our leaders across the nation will take in good direction, but there is one place we will never go: Away.”

In Maine, where tea partiers took over the GOP, the party adopted a far-right platform at their state convention, promoting Big Oil, advocating government-supported religion, and a move to an “Austrian economy”–whatever that means.

Crazy is as crazy does.