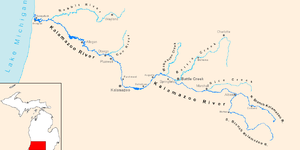 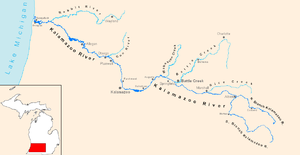 Progress of a sort has been made on one of the largest oil spills in Midwest history. From the Kalamazoo Gazette:

In a sign of the progress made in containing the more than 1 million gallons of crude oil that spilled on July 26 into Talmadge Creek in Marshall Township and eventually into the Kalamazoo River, the U.S. Environmental Protection Agency (EPA) announced on Tuesday that the agency officially ended its emergency response phase to the spill.

According to the EPA, the oil has stopped leaking from the Enbridge Corporation-owned pipeline, and now is concentrating its efforts on cleaning up the oil not only from the water but the plants and animals that call it home. Over 1,000 workers from the EPA and Enbridge are working at the site, and about 2.8 million gallons of an oil and water mixture has been removed from the creek and river.

Resident William Drumm and others worry that their property values have fallen during the disaster.

“Who would want to buy my property in the next 10 years?” he asked. “Once they re-start the line, what’s going to happen? Will everybody leave and forget about it?”

Drumm doesn’t need to worry about the line restarting just yet. The EPA has rejected Enbridge Corp.’s proposal to restart the pipeline: the Pipeline and Hazardous Materials Safety Administration says it wants more safeguards put into the plan before it can be implemented.