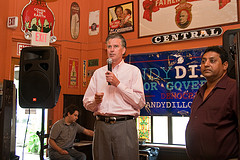 Political pundits have been burning up the air waves and nets this week analyzing Tuesday’s primary election results with Rick Snyder’s takedown if not takeover on the Republican side getting lots of attention.

Much less is being said about progressives and labor torching Andy Dillon’s plans to capture the Democratic Party for Big Business and conservatives.  Dillon’s grand political plans are in ashes and he is the guy holding the match that lit the fire.

Dillon, the former Republican, had declared war on mainstream Democrats in a thousand different ways as Speaker.   It was a battle started by Dillon that divided Democrats and gave Republicans control of the political message.

Progressive policies around consumer protection, energy, expanding freedoms, corporate accountability and other issues were smothered by Dillon’s right-leaning politics and personal ambitions.   His spectacularly goofy strategy of letting Senate Republicans define the debate around the budget not only divided his caucus it left them without any real political strategy on taxes and government spending.  Dillon’s failure to lead House Democrats with an aggressive, populist agenda for change now endangers their majority–a majority that enabled Dillon to become Speaker and for which he did nothing to create.

There are some who complained that Tuesday’s Democratic primary election was just about Dillon wanting to “shake things up” within the Democratic party and Big Labor fighting to keep the status quo power arrangement.  But it was never all about–or even mostly about–the Democratic party, labor or power for the sake of power.  It was a fight over values and whether progressives would continue to have an important voice in developing policies shaping the future of Michigan.

Conservatives and big corporations already have a Grand Old Party.   Dillon wanted to give them another one.  That was unacceptable to progressives who work on health care, environmental, family planning, equality and other policy issues.   And it would be disastrous for voters who want real choices come Election Day.

To be sure, Dillon had some support from mainstream, more progressive Democrats.  State Sen. Gilda Jacobs threw an 11th-hour Hail Mary pass defending Dillon’s pro-life position on abortion, claiming against all evidence to the contrary that he was no threat to pro-choice voters and supporters of stem cell research.  It was an embarrassing display for Jacobs but in the end her efforts were to no avail.

Mainstream Democrats wisely decided that Andy Dillon did not represent their values and gave Virg Bernero an opportunity to lead them in November.

Labor gets the lion’s share of credit for helping Bernero win the Democratic nomination for governor, pumping money and people power into a race where both candidates were relative unknowns.   It made a huge difference.

Planned Parenthood sent out 300,000 pieces of mail to Democratic primary voters letting them know the truth about Dillon’s conservative record on abortion, family planning and stem cell research.  Sierra Club made thousands of calls and sent mail debunking Dillon’s claims about championing clean energy legislation.  Hundreds of thousands of email messages and mailings were sent by Clean Water Action and others.

Meanwhile, Dillon’s corporate allies operated on both sides of the primary, giving money to Republican candidates as well as Dillon in hopes of gaining even more political control than they already have in Lansing.

Progressives still play on an uneven political field when it comes to money and politics.   But the threat that Dillon posed of conservatives and big corporations capturing complete control of both political parties in Michigan has ended.  For now.