If It’s Coerced, It’s NOT Consensual 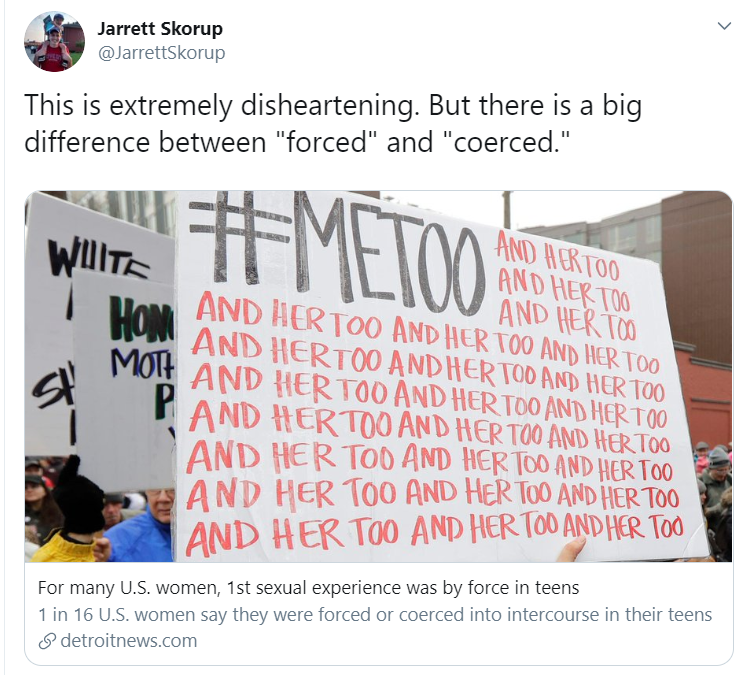 “There is a big difference between ‘coerced’ and forced.’” -Mackinac Center for Public Policy employee Jarrett Skorup, responding to an article about women being coerced into sex while completely missing the point and invalidating the sexual trauma of women across the country.

This response is pretty gross, and it reflects a broader problem with how many men engage with conversations about sexual violence in the #MeToo era. Finally, people are starting to realize that consent is more complicated than just not saying “no,” and it’s time for men to stop being defensive and start thinking more about the impacts of their behavior.

When I started my freshman year of college, I sat through a mandatory training on safe sex and the importance of affirmative, enthusiastic consent. The “yes means yes” model of consent is pretty simple: consent must be affirmative, enthusiastic, and freely given. Under that definition, someone who says yes only after being coerced in some way—threatened, badgered, guilt tripped, etc.—is not, in fact, giving consent.

Since the only sex education my high school had offered was an old-fashioned, misogynistic abstinence-only program, the idea that sexual assault encompassed more than just the kinds of violent crimes you see on Law and Order: SVU was completely new to me.

A lot of my classmates felt the same way, and several talked about times they’d been pushed into doing things they didn’t feel comfortable with and how they’d been conditioned to think of experiences like that as a fact of life, not something out of the ordinary—even if it hadn’t felt right, popular narratives around sex had never given them reason to think it was wrong.

And frankly, that’s bullshit. I’m tired of hearing stories about people suffering sexual trauma because they didn’t feel empowered to enforce their boundaries. I’m tired of listening to people discount survivors’ feelings because their experiences don’t meet some arbitrary threshold for what counts as violent. I’m tired of constantly questioning whether my own trauma is valid.

Coerced sex is assault, and comments like Skorup’s that look to downgrade the seriousness of coercion reinforce the dangerous narrative that pressuring a partner into sex is acceptable. “No” is not a starting point for a negotiation—it’s a final answer that should be respected.

Taking on the epidemic of sexual violence is going to require long-term cultural change. That means making sure our schools offer comprehensive sex education and teaching our kids that sex should always involve mutual respect and communication. It also means people like Jarrett Skorup need to think critically about their own contributions to our dialogue about sexual assault.

The bottom line here is that sexual violence can take a lot of different forms, and every one of those forms is damaging to victims and absolutely unacceptable—and attempting to compare or rank different kinds of assault is inappropriate and unnecessary. Next time Skorup feels like chiming in, he should stick to expressing his sympathy and support for survivors or keep his mouth shut.