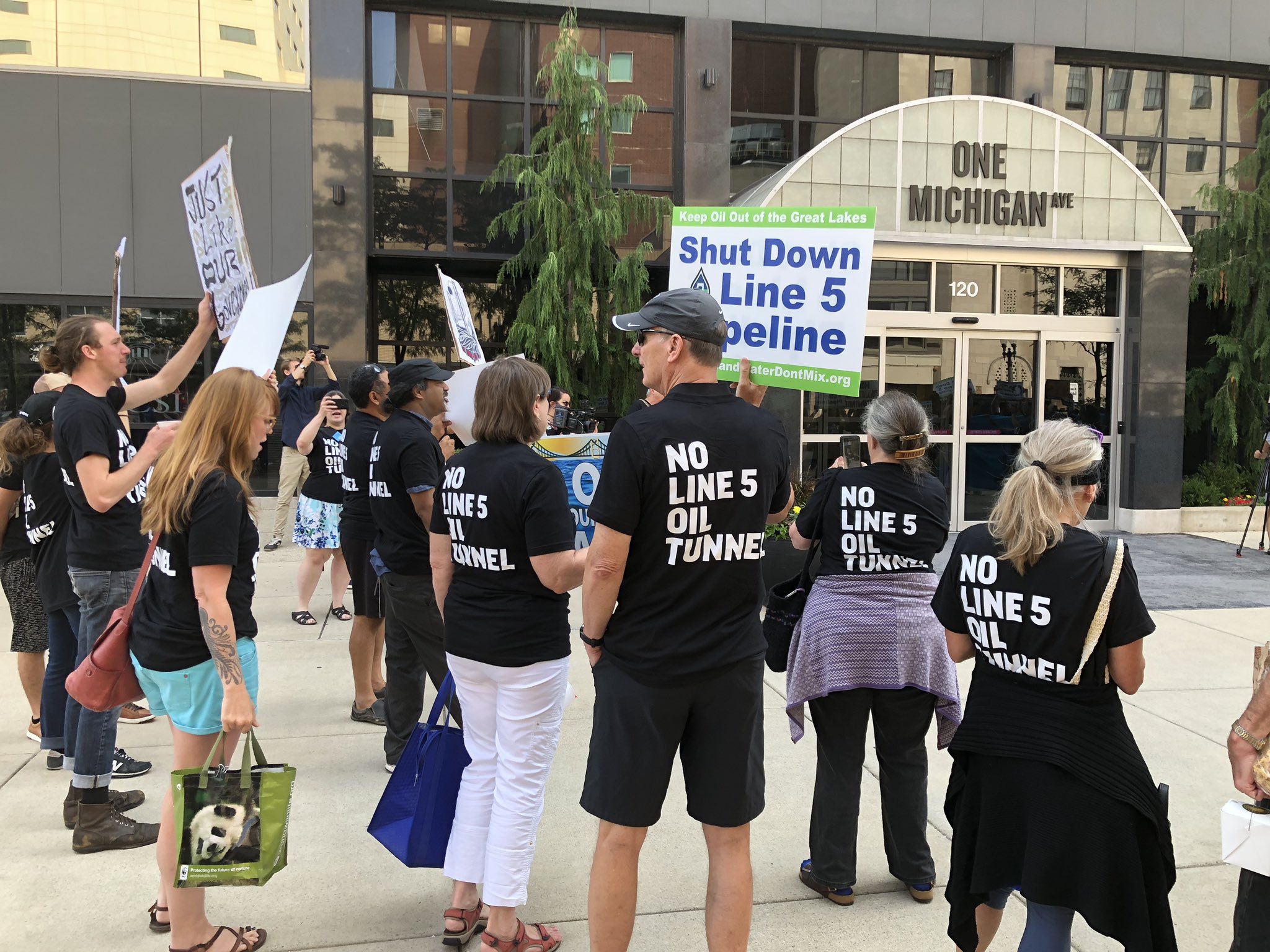 LANSING – On Thursday, in recognition of the 9th anniversary of the 1.2-million-gallon Enbridge oil spill in the Kalamazoo River, Michiganders came together to demand elected officials reject Enbridge’s proposed Line 5 oil tunnel in the Straits of Mackinac to prevent another oil pipeline disaster in Michigan.

The press conference featured speakers from Kalamazoo and those who live along Enbridge’s Line 6B, as well as organizations opposed to Enbridge’s proposed Line 5 oil tunnel. Following the press conference,attendees departed Central United Methodist Church and staged a protest against Enbridge, which has corporate lobby offices in downtown Lansing, before heading to engage with state lawmakers and staff at their offices.

“Pipelines and the oil they carry represent a danger to our environment, our public health, and our planet,” said Cayley Winters, West Michigan communications organizer for Progress Michigan. “Michigan must move away from relying on fossil fuels to provide our energy. It’s time we made an aggressive push to more clean, safe, renewable energy. Doing so would mean more jobs, better public health outcomes, and a solid move in combating the disastrous effects of climate change.”

In 2014, a U of M study funded by the National Wildlife Federation’s Great Lakes Regional Office found that in a worst-case scenario, more than 700 miles of Great Lakes shoreline could be significantly contaminated if Line 5 were to rupture.

“How do we prevent this from happening again? How can we promote safety and security to people that were affected? The solution lies in the actions that we can take now from what we learned from the Kalamazoo River spill: we must shut down Line 5,” said Shannon Wykes-Nehring, a former Kalamazoo city commissioner and organizer with We the People Michigan. “Line 5 is irresponsible. It takes the future of the state, the people of the state, and families like mine and allows Enbridge to take a gamble on our health and safety if the pipeline is allowed to continue operating.”

A worst-case scenario oil spill in the Straits of Mackinac could have an economic impact in the tens of billions of dollars, including the potential shutdown of the Soo Locks costing up to $45 billion in economic losses.

“The pattern’s clear: for almost a decade now Enbridge has exhibited a pattern of behavior that indicates that they will say or do almost anything to advance their own interest,” said Jeff Insko, a leading authority on Line 6B and Enbridge who lived near the spill area. “In the face of this demonstrable evidence of their untrustworthy actions and a historical moment that calls for urgent action to mitigate the effects of climate change, why would the Governor, or the Attorney General, or the citizens of Michigan trust Enbridge to do what’s right for the Great Lakes and what’s right for the planet? It’s high time to shut down Line 5.”