Calley Jumps in the Revolving Door 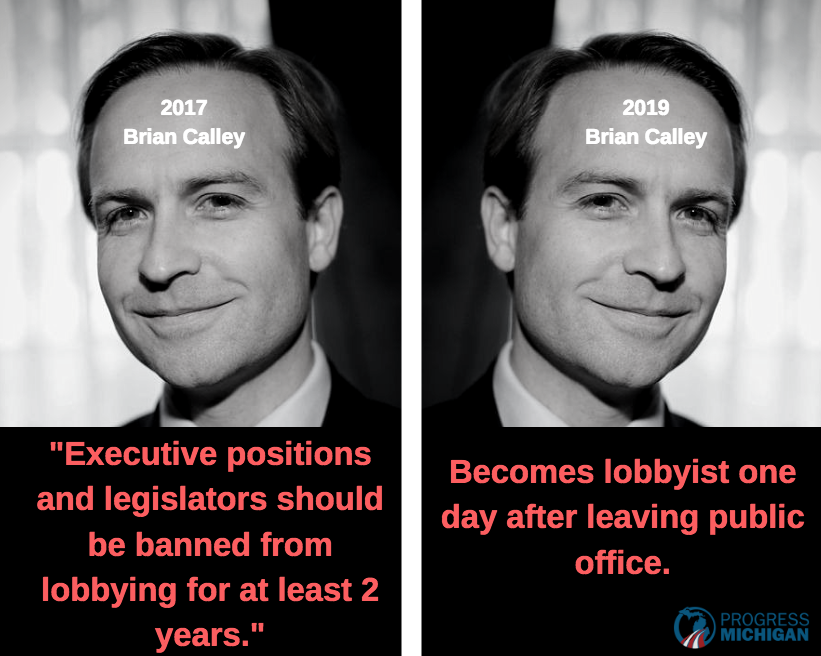 I pose this question because back in June of 2017, Brian Calley rightly called out the problem of the revolving door of lawmakers becoming lobbyists as soon as they leave office.

In a 10-point package of (mostly bad, but some good) proposed reforms to “Clean Michigan’s Government” Calley rightly said, “We must end the revolving door from legislator to lobbyist. Those serving in high-level executive positions and legislators should be banned from lobbying for at least 2 years.”

Not a bad idea. Term limits in Michigan have allowed lawmakers to spend more time appeasing lobbyists and donors to find their next job opportunity rather than crafting good public policy for the state.

So naturally, given the fact Calley said he would have “no higher priority” than to get these reforms done when he was in office, we would expect the ex-LG to hold up to the standards he wanted to foist on other lawmakers, right?

Less than a full 24 hours after leaving public office, it was announced that Calley accepted a position as president and chief lobbyist for the Small Business Association of Michigan, a business lobbying group that has notoriously opposed efforts to raise the wages and benefits for working people.

To rail against the system one day to then exploit it for your own benefit the next is the height of hypocrisy and one of the many ways the actions of the few drive the many to feel hopeless and frustrated with how our government operates. Brian Calley is part of the problem who only touted a solution for his own political gain.

Michigan has the worst ethics and transparency rankings in the country, something Calley pointed out back in June 2017. We have term limits that put more power and institutional knowledge in the hands of lobbyists than lawmakers. Our lobbying disclosure laws are a complete joke.

Touting his proposed changes in 2017 in a Detroit News column — including the lobbying ban —Calley wrote, “Just because things have been this way in Michigan, doesn’t mean it’s the best way. The best government is one by the people and for the people…that’s how we create the best future for Michigan.”

I agree with the sentiment 2017 Brian Calley was trying to make when it comes to ending the revolving door of lobbyists and lawmakers. I just wish the 2019 Brian Calley felt the same way.