Progress Michigan Names Darrin Camilleri as 2017 Legislator of the Year 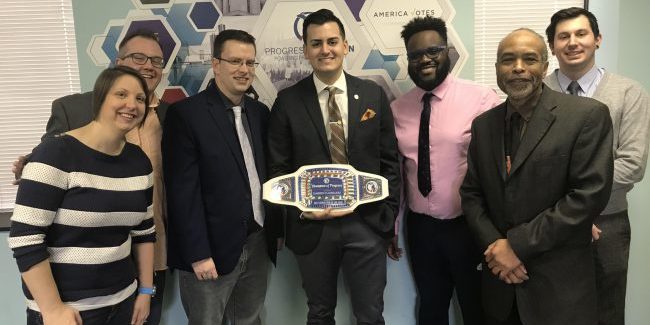 Progress Michigan Names Darrin Camilleri as 2017 Legislator of the Year

LANSING — Progress Michigan is proud to announce State Representative Darrin Camilleri as the organization’s inaugural winner of its Legislator of the Year award. The purpose of the award is to recognize legislators who exemplify progressive values in the Michigan Legislature and fight for a more welcoming, sustainable, and equitable Michigan that is of, by and for the people.

“State Representative Darrin Camilleri is one of the newer faces in the legislature, but he hit the ground running from day one and has continually shown his commitment to progressive values. His work to repeal the pension tax, voting against corporate tax handouts, working to enshrine literacy as a right, and getting younger people involved with the political process are some of the reasons he’s earned this title,” said Lonnie Scott, executive director of Progress Michigan. “Rep. Camilleri is a great representative for his district, as well as the progressive values we lift up here at Progress Michigan. Our inaugural year for this award featured some excellent nominees and we thank all of them for their work and commitment to making Michigan a better place for everyone.”

“I’m honored to receive this award that recognizes my commitment to achieving progress for the state of Michigan and its working families,” said State Representative Darrin Camilleri.  “We have an opportunity each day we come to Lansing to fight for our values and priorities, rather than settle for the inequalities of the status quo. This award calls attention to my colleagues’ and my work in the legislature as we fight every day for a brighter future for Michigan.”

“This was not an easy decision, there are so many elected officials in Michigan who are doing great work and standing up for the people,” Scott continued. “The response from around the state to this nomination process has been great, we’ve heard from thousands of people who cast their vote. We’re looking forward to continuing the award for 2018 and expect to see great things out of the progressive legislators in Lansing.”