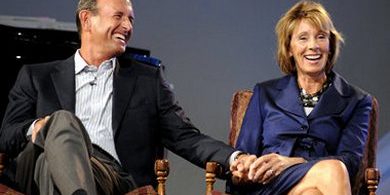 Having already purchased the Michigan Republican Party to push their right-wing, extremist agenda, the DeVos family is now exporting their corporate cash to other territories to buy elected officials and political influence in other parts of the country.

Case in point, Tennessee, where it’s reported that the DeVos family is meddling in a state house race.

According to a columnist for The Commercial Appeal, an attack ad against a pro-public school elected official that popped up in his neighborhood said: “Paid for by the Tennessee Federation for Children.”

The only problem is, it’s the Michigan-based DeVos family, not some Tennessee-focused organization that’s footing the bill for the PAC. The detail was not lost on the local columnist, who had this to say of the right-wing organization:

“That’s a pro-voucher, pro-charter, anti-public school PAC based in Washington, and backed by the billionaire DeVos family of Amway fame. The PAC has spent hundreds of thousands of dollars on campaign ads in Tennessee.”

The PAC is also funded by the Walton’s the anti-worker family behind the Walmart fortune, according to the columnist.

Not only is the DeVos clan pushing their agenda in Tennessee, they’re taking their extremism to the national level. Check out this tweet from a CNN reporter. It shows a slew of DeVos family members donating tens of thousands of dollars to the Republican National Committee. Most of which are sent on the same day and are of the same massive amount.

On Twitter, the reporter opined: “Feels like every major giver to the RNC last month is from the DeVos family.”

The DeVos family is well-known for their propensity to throw cash around in Michigan to suit their extremist agenda:

-They tried to buy a prevailing wage repeal earlier this year

-They spent $1.2 million in the two months leading up to the August primary to fund right-wing causes

-Their connection to the anti-teacher, anti-public education Detroit Public Schools “reform” has been well-documented

-They funded the Right to Work assault of 2012

All the while, they’re funding groups, like the Michigan Freedom Fund and the Great Lakes Education Project, that serve as front groups for their anti-worker, anti-teacher, and anti-progress agenda.

The Michigan Republicans are beholden to those who hold the purse strings and the DeVos family never has a problem doling out cash. Head over to Progress Michigan’s Sunshine Squad website, do a quick donor search on any Republican legislator, and you’ll likely find their campaign pockets flush with DeVos cash.