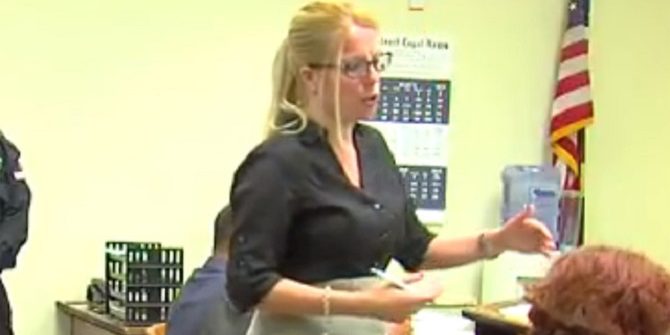 In May of 2015, Progress Michigan called out Assistant Wayne County Prosecutor Teana Walsh, who was advocating on her Facebook for the summary execution of Black Lives Matter protesters and rioters in Baltimore in the wake of the killing of Freddie Gray. She wound up resigning from her position in disgrace.

But guess what? She’s back.

The Detroit News reports that after roughly a year out of the office, Walsh is back in the prosecutor’s office on a contractual basis.

In her position as assistant prosecutor, she was tasked with ensuring justice for victims as well as safeguarding the rights of the accused. Calling for the extrajudicial killing of citizens is a dangerous and racist view to hold in a position where good judgment and a sense of justice are paramount.

On the flip side of the coin, in the wake of the attack on police in Dallas, across the country, including Detroit, people are going to jail for for speaking out against the police online.

Imagine if she had called for the shooting of police. Do you think she’d still have a job? Hell no.

But in America, black lives are expendable and calling for their summary execution is a forgivable offense. Apologists for such behavior chalk it up to bad judgment when it’s in fact white privilege and racism at the roots.