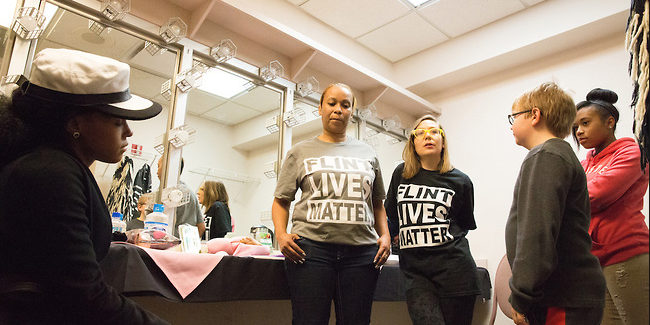 Today is International Women’s Day and the Michigan Presidential Primary. What could possibly be better than celebrating the social, economic, cultural and political achievement of women and voting? Not much.

My coworkers and I have been traveling to Flint at least three days out of the week since the beginning of 2016 – helping distribute water, organizing trainings and press conferences, and meeting and interviewing residents from the city about the Flint water crisis. In doing so, I’ve had the opportunity to meet some truly amazing women:

Nayyirah Shariff is an organizer with the Flint Democracy Defense League and Flint Rising activist. She has been at the front lines of the Flint water crisis since day one, making sure that people have access to clean water and resources, helping people test their water, and organizing and speaking at events, press conferences, and to the media about the crisis. Even before the water crisis began, Nayyirah was fighting to restore democracy to the people of Flint after Snyder implemented an emergency manager in the city in 2011.

Desiree Duell is a local artist, activist with the Flint Rising coalition, and a mom. She has been working tirelessly, attending and organizing community events, meetings, trainings, protests, and speaking to the media and at press conferences to tell her story and call for action.

Nakiya Wakes, is a mother of two and a Flint Rising activist. Nakiya home schools and is a stay-at-home mom to take care of her kids who have health problems. That alone is full-time work, yet she has stood up time and again and spoken at press conferences, to the media, and at events to share her story and call for action from Snyder and elected officials in the legislature.

Melissa Mays is the founder of Water You Fighting For? and mother of three. Her and LeeAnne Walters were two of the first women to raise concerns and sound the alarm about toxic water in Flint in 2014. Melissa has done countless media interviews on the issue, traveled with her family around the state and country to protest and speak about the Flint water crisis, and helped to organize local responses to make sure that Flint residents receive clean water and resources.

Those descriptions really don’t do justice to all the work that these women have done in response to the Flint water crisis. Nor do they account for the incredible contributions of Dr. Mona Hannah-Attisha on the public health front, Flint Mayor Karen Weaver working tirelessly to replace the city’s bad water pipes, or numerous other women who have been working on this issue whose stories I aim to highlight as well. They are all fighting for basic access clean water and to restore democracy on top of having to deal with the serious health problems that they and their families and friends are experiencing as a result of drinking and bathing in poisoned water. They don’t take days off, they don’t stop and they won’t stop until Snyder has been held accountable and the people of Flint have justice. I am truly inspired by them and feel fortunate that I’ve gotten to meet and support what they have been doing to rebuild Flint.

International Women’s Day is about celebrating women’s’ achievements and it’s also a reminder that women are still not treated equally in our society.

Women and children have been hit hardest by the Flint water crisis, but women have also been at the forefront of the response.

Women, especially women of color, are disproportionately impacted by a host of issues from climate change to unequal pay because, throughout history, people (mostly men) in positions of power have intentionally put us at a disadvantage through sexist, discriminatory policies and limited access to decision-making and positions of influence and leadership.

But in 2016, women, particularly single women, are one of the most powerful groups of voters in this election. Together, we can shift the balance of power in our state and our country. We can influence through our voices and our votes whether or not those in power take action on issues like equal pay, paid family leave, and ensuring that all women have access to affordable, comprehensive reproductive health care. We can elect representatives who will prioritize people over profits and make sure that disasters like the Flint water crisis don’t happen again.

For all the information you need on the 2016 election in Michigan and to find your polling place, click here.