Mackinac Center: Flint “Should Be Grateful” for Emergency Management 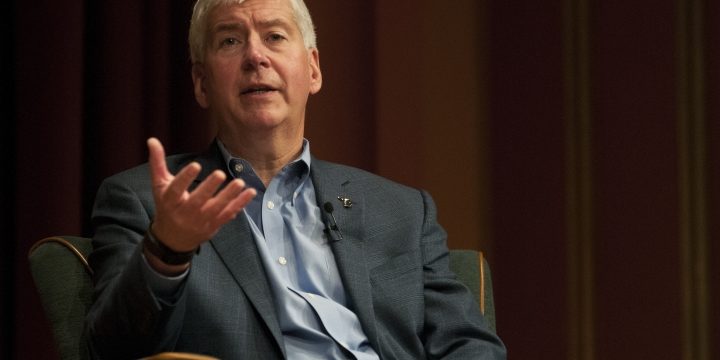 The right-wing Mackinac Center for Public Policy is making news after being charged $172,000 for Flint city records relating to the water crisis. They should get the records for a reasonable rate, as we have argued in our own battles for public records. But the story raises another, more pressing question: where has the Mackinac Center been on Flint for the last two months?

The Flint Water Crisis is international news. It is, as the Mackinac Center itself notes, the largest public health crisis in Michigan since the 1970s. Each day brings new and horrifying revelations, from sky-high lead levels to the state’s cover-up of a fatal Legionnaires’ outbreak to this week’s discovery of even more toxins in the water.

Virtually every public policy organization in the country has issued a public statement or offered assistance to Flint by now. So why has the Mackinac Center been holding its tongue – and its help?

It could have something to do with the fact that the group pushed for key provisions in Public Act 4 – popularly known as the Emergency Manager law – which led to Flint’s poisoning in the first place. Over the past five years, Gov. Snyder has used the law to strip majority-Black cities and school districts of democracy, install unelected financial managers and impose brutal austerity measures at the expense of public health – most disastrously in Flint, but also in Detroit Public Schools.

And the Mackinac Center helped to create this monstrosity. In January 2011, the think tank recommended four revisions to the law that would radically expand the scope of emergency powers and protect emergency managers against lawsuits – changes that were incorporated into the final bill.

But they weren’t done. In a 2012 blog, Mackinac policy analyst Jarrett Skorup continued to defend the anti-democratic law while mocking advocates of local control and noting that “only” seven emergency managers had been imposed, including in Flint. Here was his conclusion:

When forced to choose between an emergency manager and a federal bankruptcy judge, local citizens and government employees should be grateful for the option of getting the former.

In other words: Flint residents – who did not create the “financial emergency” for which they are now being punished – should be grateful for being disenfranchised in the state’s attempt to maximize corporate profits by cutting vital public services.

It’s the same sick mentality displayed by the GOP leadership as Gov. Snyder and his cronies, fresh from destroying the Flint water supply and poisoning an entire generation of children, now demand recognition – indeed, gratitude – for half-measures like discounting Flint residents 65 percent on their poison water bills.

It would be comforting to think that the Mackinac Center has seen the error of its ways and now recognizes the importance of protecting local control. But its FOIA request for Flint city records and still-defensive attitude toward Gov. Snyder – who it claims charitably released his records “at no charge,” as if they were not wrested from him by massive protests – hint at a darker motive: trying to deflect blame for the disaster from state to city officials, effectively clearing Mackinac’s name.

Unfortunately for the corporate front group, activists with the Flint Rising coalition are stepping up their fight for justice – and letting the state off the hook isn’t part of their agenda. They know that responsibility for the water crisis goes all the way to the top. Even the Mackinac Center’s well-oiled propaganda machine is unlikely to put a dent in their resolve. As one resident told an ACLU documentary crew: “They poisoned the wrong city.”