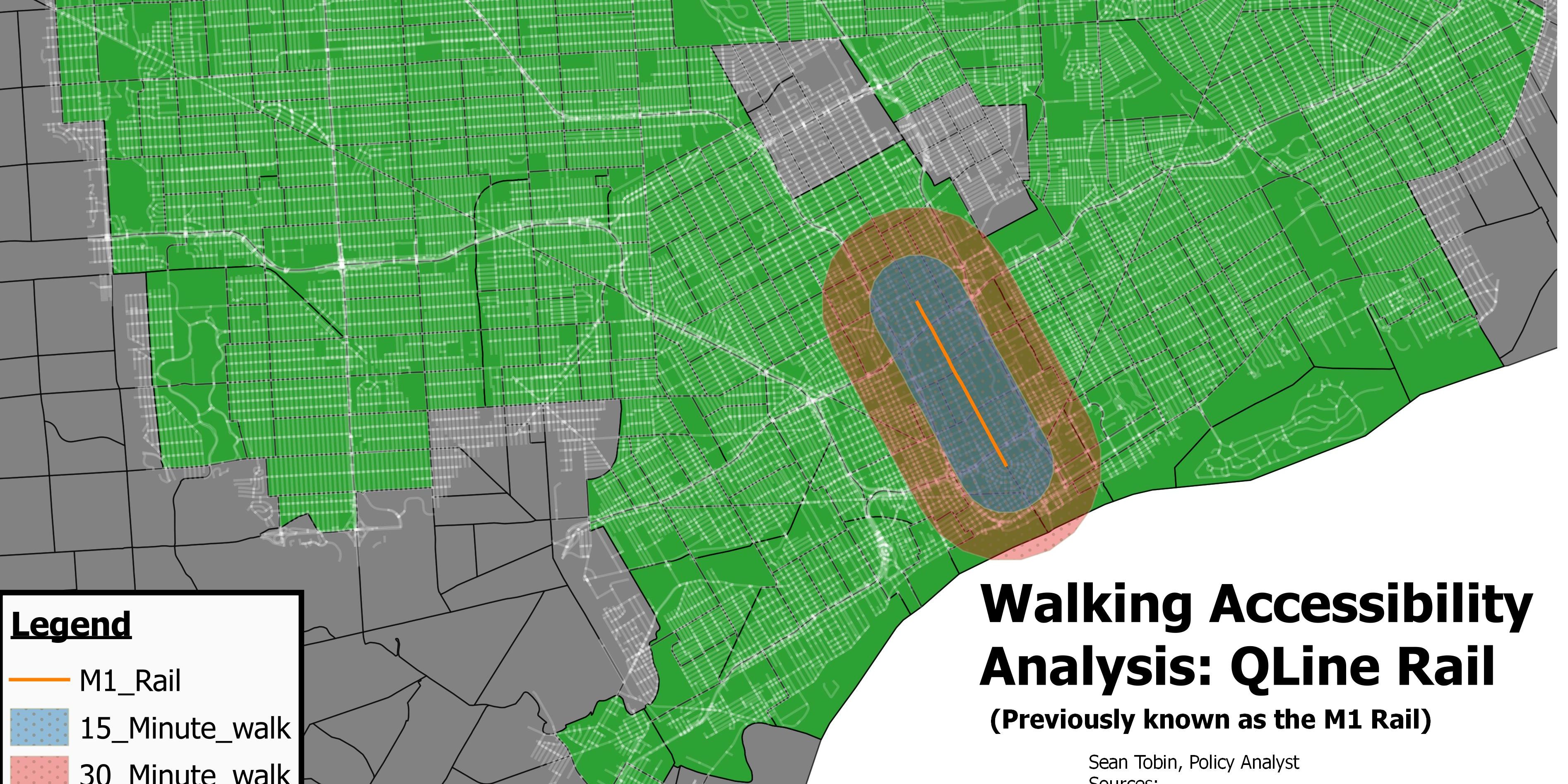 Last week I decided to revisit the M-1 rail and I have to say there have been some alarming developments. The M-1 Rail has been a controversial project whose ongoing criticism is that the rail will not benefit the public at large, nor will it be effective.

In fact, one misguided author’s take on the project’s specific merits admits that the construction of the rail is designed “…not necessarily to move people… but this is a way to boost economic development and real estate development.”

If a rail line isn’t for moving people, what purpose will the roughly $30 million of allocated public funds serve?

I thought it would be prudent to create a map and analyze just how useable this service will actually be, maybe there was a misunderstanding somewhere. This map depicts how long it would take to get to the rail on foot, as well as how many people are inside a reasonable walking distance. I decided that most would walk 30 minutes or less, given there are alternative modes of transit. All of that was accomplished in the map below. To measure population I used the most recent American Community Survey Data. 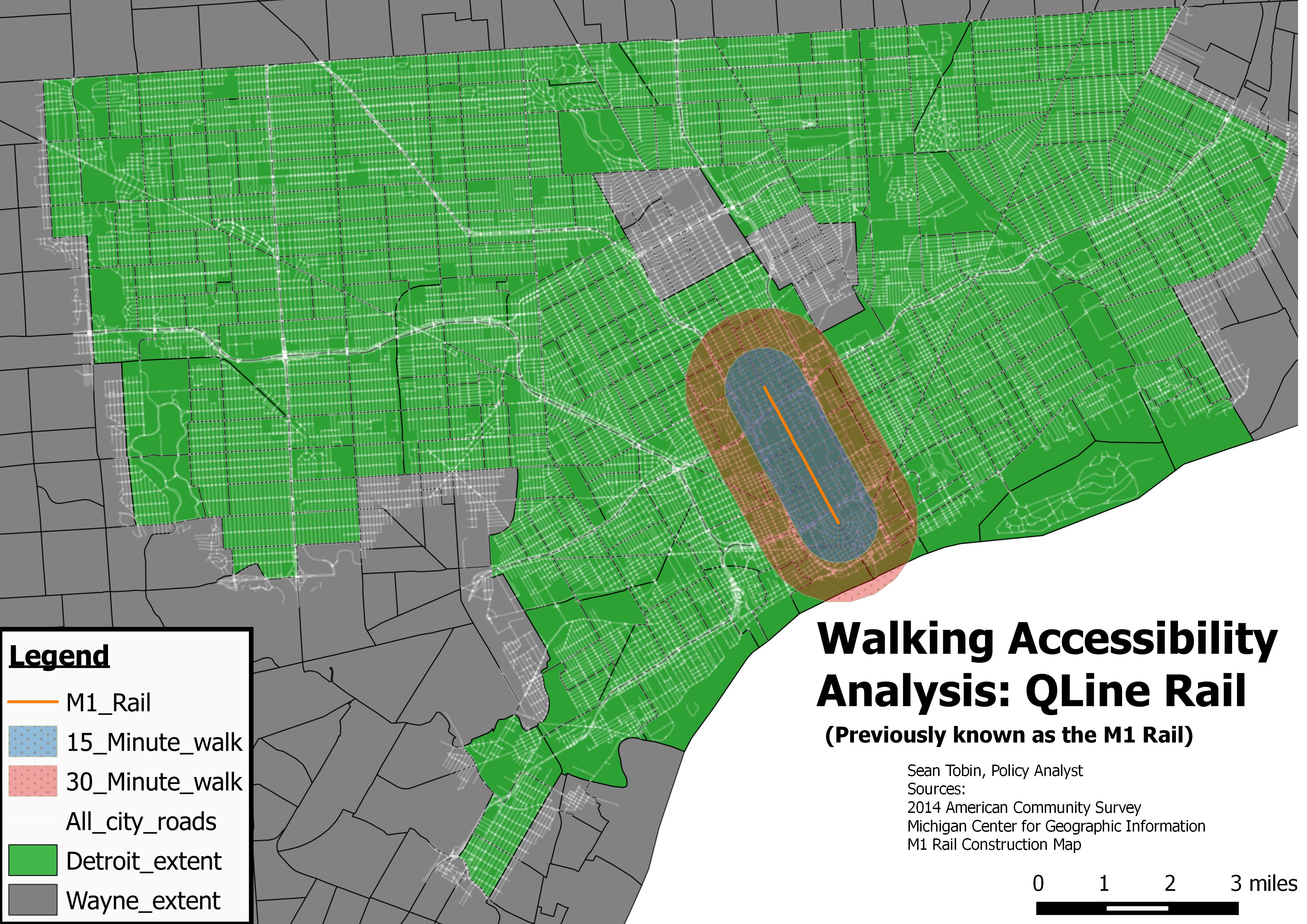 I found that roughly five percent of the city is within a 15-minute walking distance and eight percent a 30-minute walking distance of the entire length of the rail. That is miniscule, but as some hypothesize – this is not for the people. This finding is solidified when we take into account the abhorrent service hours, which are only 6 a.m. to 10 p.m. for Monday to Saturday and 8 a.m. to 10 p.m. on Sunday. Those hours do not suggest a reliable or usable system.

After failing to disprove the biggest critique, we are left to assume there must be some other benefit to this line. That alternative explanation was not difficult to find.

You can all find it posted on the M-1 Rail’s homepage in the form of a press release. Apparently the rail has been renamed the QLINE, in honor of Quicken Loans, a Detroit-based corporation and the largest private donor in this Public Private “Partnership.”

That development caused me to pause. We have shown that the rail will struggle to generate much in the way of downtown activity (by getting people there). In that case, we are left with only one real explanation. We are left with the understanding is that this rail is being built to raise local real estate values.

One reason this is truly problematic is that Dan Gilbert, owner of Quicken Loans, also happens to own 79 downtown properties very close to QLINE. As has been studied and stated in the quote above, transit enhances local property values. Public dollars are being used as an investment device for Dan Gilbert and a small handful of other individuals.

Private leveraging is the sole reason the M-1 Rail is being constructed as it is. Originally, the interest from the federal government was for a light rail system that could act as a trunkline to bring people into and out of the heart of Detroit to surrounding locales. This was meant to combat the issue that Detroit’s public transportation system has been woefully inadequate for years.

Suffice it to say, corporate interests exercised leverage, which resulted in the light rail being morphed into a trolley line that would go 1/3 the distance it was originally planned. So, after private input, the service would carry fewer people a shorter distance. The map above shows the M-1 Rail and its location in the city.

It is plain to see that this rail is a private venture, hijacked by private dollars, and is not meant to support rebuilding Detroit but rather pad the pockets of predatory home loan maker Dan Gilbert, all the while leaving tens of thousands of Detroit bus riders in the lurch. The fact that the rail should be renamed to honor a company that sold the city on derivatives and profited off of so many on bad mortgages – both of which are widely accepted as main causes of the Detroit bankruptcy – is like feeding the wolf that is going to keep biting you.

I think it is prudent to outline a suggestion that can make this venture a truly successful project and something the people of Detroit, and really all of Southeast Michigan, can get behind. It is actually pretty simple; this is a call for regional cooperation.

As many bus riders in the region may be aware, there are two main transit service providers; they are the Detroit Department of Transportation (DDOT) and the Southeast Michigan Area Rapid Transit Authority (SMART), overseen but not run by the Regional Transit Authority (RTA). Because I love maps, I’ll depict these service’s routes in the map below, along with the QLINE for comparison.

The point in bringing up these other organizations is that they are the bread and butter of transit for the region. The reason for bringing this up is that the QLINE, previously the M-1 Rail, has failed to hammer out a system in which riders can transfer from DDOT or SMART. Eight years of work and such a small thing to accomplish has gone unsolved. In looking at the map below, anyone with any common sense will see the huge feeder system that is being neglected. That is just bad business.

Those involved with the QLINE, Dan Gilbert, Mike Illitch, and Roger Penske to name a few, should push for a shared ridership system to facilitate payment and use alongside existing systems. This will give the QLINE the ridership it needs to survive, and ideally expand. This will also be a positive step toward regional cohesion. The alternative to ignoring this problem is that QLINE will become irrelevant or even worse some kitschy prop. 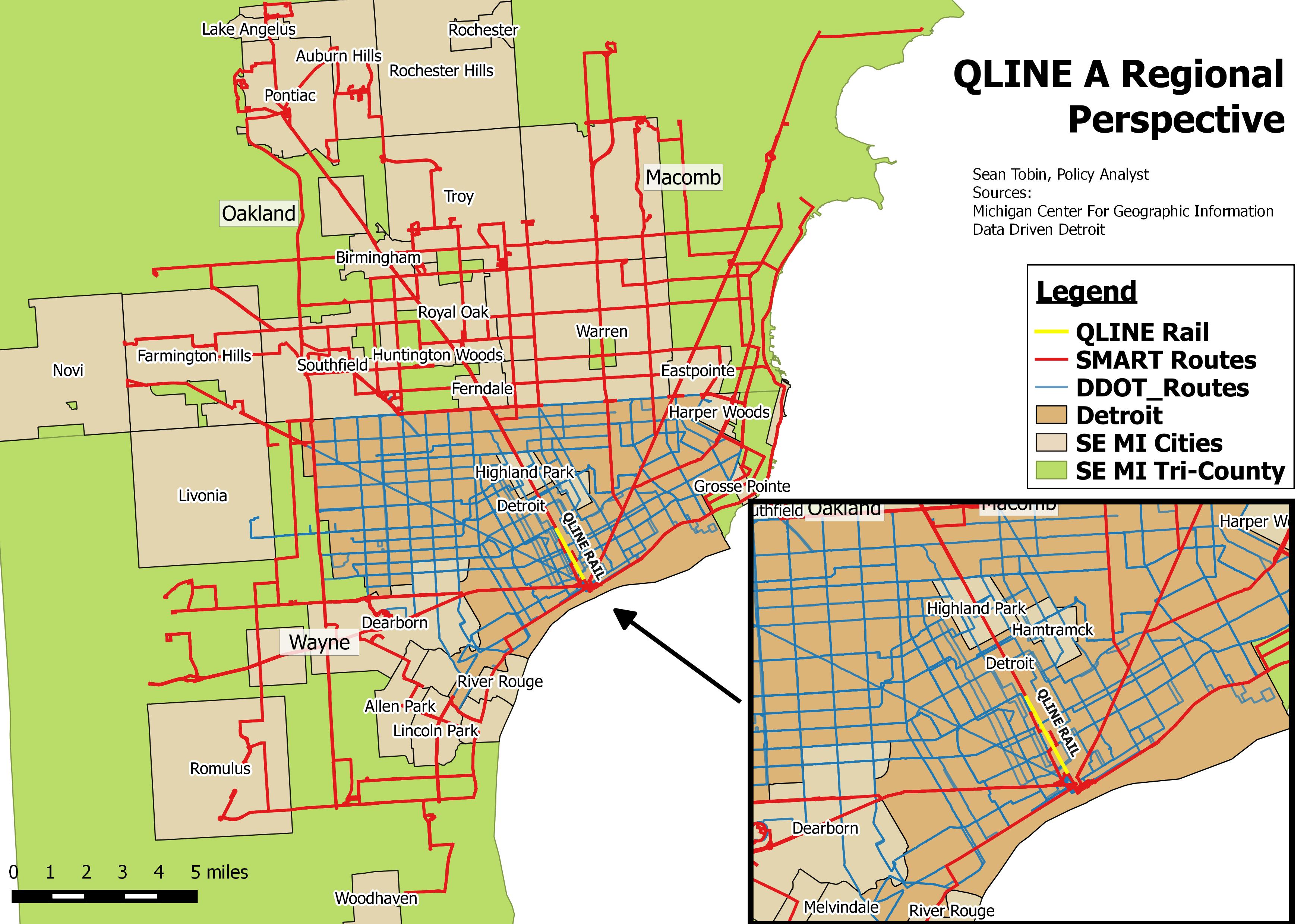