Corporate Elites to Snyder: We’ve Got Your Back on Flint 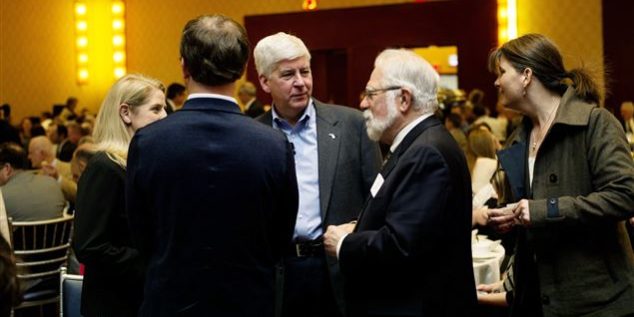 If you thought that poisoning a city of 100,000 people would be a bridge too far for Michigan’s urbane, oh-so-reasonable business elite, think again.

Last week, the Economic Club of Grand Rapids welcomed Gov. Snyder – fresh from his Congressional grilling on the Flint Water Crisis – with nothing less than a standing ovation.

Keep in mind that Flint residents, after being irreversibly poisoned for two years, still do not have reliable access to clean, safe water. And now, due to Gov. Snyder’s use of a loophole he himself created, their tax dollars will help pay $1.2 million for his legal defense.

It would be easy to condemn the business community’s response as tone-deaf. But it wasn’t. It struck exactly the right tone for the people intended to hear it – right-wing officials across the state who put corporate profits ahead of people’s lives.

Their applause was a racist dog-whistle with all the subtlety of an air horn. It said: Don’t worry, Governor. We take care of our own. You may be in the hot seat now, but there’s still money for us to make together. You will not go to jail. You will not even have to resign. Business will continue as usual.

And to all of the corporate courtiers who were not present: Don’t let Gov. Snyder’s legal troubles deter you from carrying out our agenda. Know that you can poison thousands of people, kill some of them, obscure the facts, even force the survivors to pay your legal bills – and we will support you as you have supported us.

The effect of this unspoken pronouncement will be to embolden the state’s most reactionary elements. Indeed, the past week has already seen a wave of far-right legislation introduced, from a bill targeting transgender students for harassment to another intended to scuttle ballot initiatives that would legalize marijuana and ban fracking. Meanwhile, GOP legislators continue to withhold emergency funding for Flint until the next budget session in October.

With that standing ovation, Michigan’s one percent effectively endorsed the poisoning of Flint and closed ranks around its chief perpetrators. Their message is clear: there will be no concessions, no reprieve from lethal austerity measures, not even in the wake of the greatest public health disaster in recent U.S. history.

It’s just the latest reminder of what Frederick Douglass wrote back in 1857: “Power concedes nothing without a demand. It never did and it never will.” That statement has never been truer than it is today for the people of Flint.