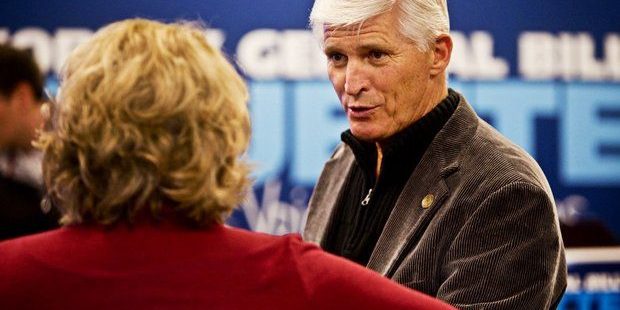 Republican National Committeeman Dave Agema once again took to Facebook today to spew his right-wing intolerance and hate speech. This time, he quoted a racist speech from Russian President Vladimir Putin in an attempt to bash Muslims and immigrant minorities. In case you didn’t know, Agema has a history of hating both.

“Russia does not need Muslim minorities. Minorities need Russia, and we will not grant them special privileges, or try to change our laws to fit their desires, no matter how loud they yell ‘discrimination’. We will not tolerate disrespect of our Russian culture. We better learn from the suicides of America, England, Holland and France, if we are to survive as a nation. The Muslims are taking over those countries and they will not take over Russia.”

Obviously there are problems with this speech — blatant racism, fascist overtones and fear mongering — but there’s a problem with it beyond the language and its intentions: it’s totally fake.

According to the rumor-busting website Snopes: “The Speeches and Transcripts section of the official Russian presidential web site records no Putin speech of that nature … nor does a record or mention of anything like this speech appear elsewhere on that site or in any news accounts (Russian or foreign) published since then.”

Dave Agema is so desperate to spew his racist and bigoted ideas that he’s willing to quote a fake speech from a Russian pseudo-dictator to push his agenda.

Remember, this guy represents the Michigan Republican Party on the national stage. Let that sink in for a moment.

Agema ends his post by saying, “If you keep this to yourself, you are part of the problem!”

No, Dave. You sharing this Islamophobic BS is the problem. 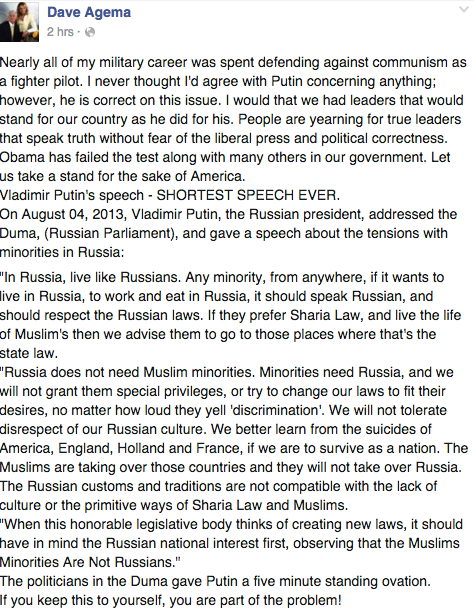