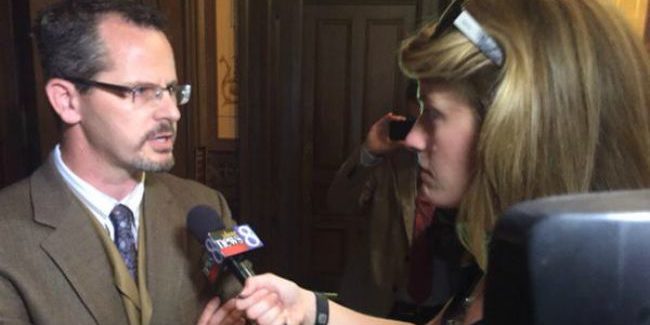 Todd Courser is a special kind of Republican. Not because he can reach across the aisle or has revolutionary ideas for the conservative agenda. He’s special because he seems to have no shame and with no shame comes no filter, which gives us an unbridled look into the mind of conservatives (or former elected officials) like him across the state and country.

That’s how he responded on Facebook to the latest mass shooting in Oregon.

I’m sure many Republicans would love to slap that on a bumper sticker for their next campaign if it weren’t a direct quote from Courser.

America does not need more guns. Seriously, we have enough at this point. We have the most guns per 100 people in the world (around one for every person) and we have the highest gun-related deaths per 100,000 people. We need more guns like we need more expensive health care — we don’t.

But we can’t forget about the second part of Courser’s declaration: “freedom.” Apparently we need more of it. But only “freedom” when it comes to the “more guns” part. You see, “freedom” doesn’t really mean anything to Republicans.

You see, Todd Courser’s “More guns more freedom!” is not the ramblings of a crazy person, despite its shallowness and defiance of logic. It’s the platform of the Republican Party.

Most message-tested, polled-rhetoric-using Republicans won’t give you the unvarnished truth about their agenda like Todd Courser, which makes him a special kind of Republican. The GOP establishment may despise Courser because he doesn’t go with their flow, but their values are his values and his priorities are also their priorities.

If you have the desire to read the whole thing, here is Courser’s full response to the shooting. It sticks pretty tightly to the guns and freedom line:

More guns more freedom! The loss of life happened and it is absolutely tragic; my heart breaks for those who died at the hands of this demonic spirit; the tragedy is due to pure evil being unleashed and gun restrictions – less gun rights less freedom – more gun rights more freedom. Campuses need to allow students to carry firearms. Again what we learn from these tragedies is that we do not learn from these tragedies; again this act of pure evil happened in a “death zone” or as political correctness calls it a “gun free zone.” It is well past time to end gun free zones!

It’s worth noting that Courser is wrong about the campus being a “gun free zone.”

Switch a couple of words around and you could throw the name of almost any GOP elected official onto that statement and call it a day. When it comes to guns and pushing their bastardized version of “freedom” conservatives are a one-trick pony and they only know one way to respond to these types of American-made massacres. Whereas, most GOPers want to use the PG, made for TV version, Courser goes straight to the snuff film script.

Courser’s unpasteurized version of conservative ideology gets slathered on so thick and pure that even people who normally love the taste find themselves spitting his words into a napkin. For conservatives who believe what Courser believes, they may say his words or views are too much, but they have to realize that what Courser is dishing out is exactly what they’ve been serving up themselves for the past 40 years.