Conservatives Must Choose: Kim Davis or the Constitution 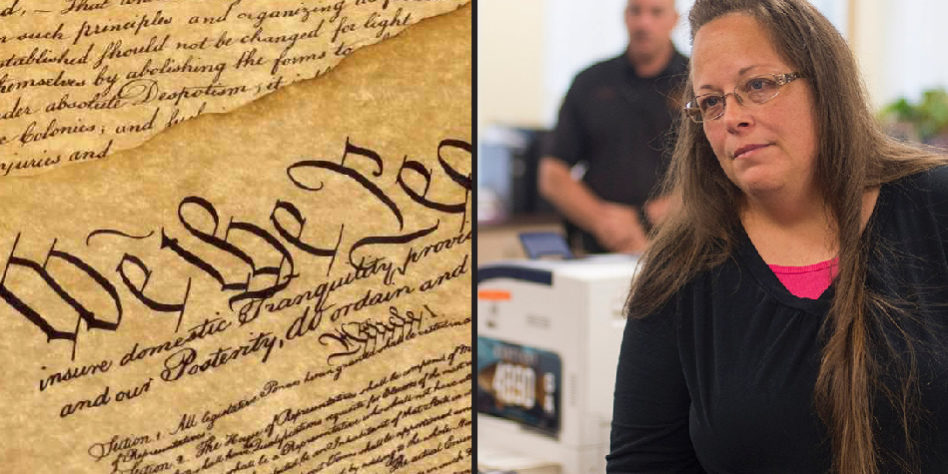 This week, Federal Judge David Bunning released Kim Davis from jail after he was satisfied that her deputies would continue to issue marriage licenses to all couples. Outside of the jail in Grayson, Kentucky, a rally in support of Kim Davis took on the feel of a revival with crosses waving, television personality and part-time Presidential candidate Mike Huckabee crooning and Kim Davis praising her god. Many in the audience equated the Rowan County Clerk with heroes like Rosa Parks and praised her for standing up for her beliefs. But true conservatives should steer clear of Ms. Davis’ latest vanity project.

Conservatives can praise Kim Davis and call her a martyr but they can’t support her and the Constitution at the same time. Kim Davis is not only defying marriage equality; she is defying the principles on which our nation was founded. One just can’t ignore a ruling of the Court – especially if they are an elected official, elected to serve the people and protect and defend the Constitution.

Kim Davis is not a modern day Rosa Parks, rather she is George Wallace standing in the door of the school, blocking access to rights guaranteed by the Constitution and affirmed by the Supreme Court. In the years after the historic Brown v Board of Education case, many elected leaders openly defied the Court – often using the same type of pseudo religious language to justify their hate and defiance. In response, the Eisenhower administration ordered the National Guard to escort children into school and the Supreme Court issued numerous, often unanimous orders and rulings affirming the decision in Brown.

The fact of the matter is that our country is not a Christian nation. That doesn’t preclude people of faith to work within the political and public sphere to influence policy. As a Christian, Martin Luther King, Jr. called us to be a better nation but he never sought to use government to impose his beliefs on individuals. Our country is a republic and the Supreme Court is the final arbiter of what is and isn’t constitutional. Kim Davis has a right to work as an individual to speak out for her beliefs in the public square – the First Amendment protects that. Clerk Davis does not have the right to impose her beliefs on others in her official capacity as an elected official – her job is to protect the rights of others, not trample them.

For conservatives, Kim Davis poses a dilemma. After decades of pandering to dominionists who claim that we are a Christian nation, conservatives are caught between the constitution and the mob-like mentality of the “Christian” right. How they respond will tell us who is serious about defending our Constitution and who is afraid of religious fanaticism of the right.