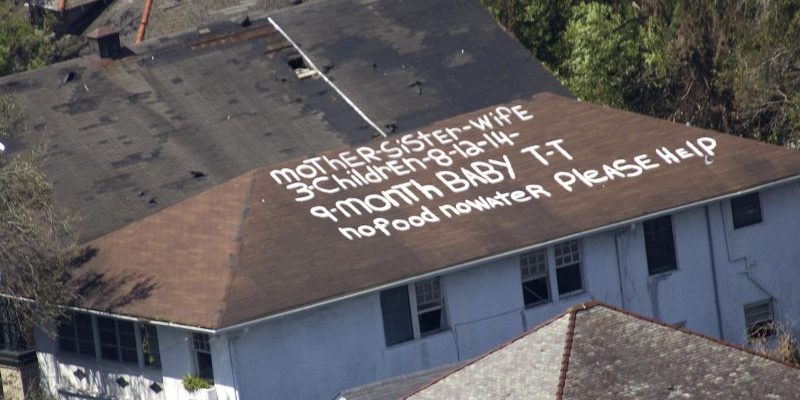 Ten years ago this week, Hurricane Katrina made landfall in Louisiana leaving death and destruction in its wake. The images of the levee failing, the water rushing through the French Quarter and desperate people waiting for help that never came are part of our national consciousness. While the cause of the hurricane is based in meteorology and climate change, the failure to protect the people of New Orleans should be laid at the feet of conservative ideology.

Conservatives worship failure when it comes to governing. Ronald Reagan slashed taxes for the rich and cut programs for the rest. Reagan also turned a blind eye to the AIDS epidemic allowing countless people to die on his watch all because of the conservative fetish with less government. George H.W. Bush was sacrificed at the altar of conservative ideology because he worked to balance the budget by raising much needed revenues after years of Reagan’s dismantling of our government and George W. Bush failed to protect the people of New Orleans from a natural disaster – even though he thought FEMA Director Brown was doing “a heck of a job.”

Sadly, conservatives haven’t spent the last decade learning the lesson that Katrina washed ashore – a country that fails to invest in itself will fail. They refuse to believe that government can do anything correctly, despite the facts to the contrary. Instead of repenting and working to make America great, conservatives have used New Orleans as a laboratory for further experiments with people’s lives.

Since the hurricane, conservatives have used the destruction of New Orleans to gut the school system – turning it over to corporations hell-bent on profiting on the backs of poor students. They have gutted pensions, cut more services and destroyed labor unions. Death and destruction caused by conservative elected officials is nothing more than an excuse to cause more destruction.

Of course, the post-Katrina experiments are not limited to New Orleans. Governor Rick Snyder, never a guy to miss a chance to help others profit off of children, has relied on the architect of the dismantling of public education in New Orleans for advice on how to increase profit opportunities in Detroit’s public school system. The Chicago Tribune even published a fantasy by a conservative author hoping that Chicago would experience its own Katrina.

Four years before Katrina, Grover Norquist stated, “I don’t want to abolish government. I simply want to reduce it to the size where I can drag it into the bathroom and drown it in the bathtub.” Norquist was close. Instead of drowning government when it got small, Norquist and his conservative allies simply governed in a way that allowed for the men, women and children of New Orleans to drown in their own homes – having been failed by conservative ideology.

The fact of the matter is that ten years later, after thousands of people suffered as their lungs filled with water, conservatives have shown no shame. Instead they have filled their wallets with profits made from continuing to use Katrina as an excuse to take more from people who have little. Sadly, that is the legacy of conservative America post-Katrina.