There’s a Sheriff Arpaio in Your Backyard, too. 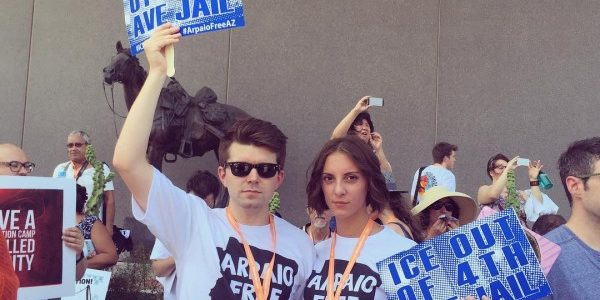 I was in Phoenix, Arizona last week for Netroots Nation. Netroots is one of the biggest progressive conferences in the country. Every year, thousands of activists come together to make new connections and build relationships with others to make progress on the issues we care about most.

We also stand together in solidarity when the community that we’re in is being oppressed and marginalized. Last year, thousands rallied in Detroit calling for a stop to the inhumane water shutoffs that were (and still are) affecting thousands of people and families across the city. That action put a national spotlight on the issue and was part of what prompted United Nations officials to call for elected leaders in Detroit to restore water service.

This year, we took to the streets of Phoenix to stand up to Sheriff Joe Arpaio, who has a long history of abusing power and, according to a Department of Justice report, is the worst purveyor of racial profiling investigators have ever seen. He created Tent City, the most inhumane jail in the country that Arpaio himself has called a “concentration camp,” and relentlessly persecutes the migrant community in Maricopa County, home to Phoenix and the metro area.

Hundreds of people from across the country marched calling for Arpaio’s immediate resignation, an end to the collaboration between U.S. Immigrations Customs and Enforcement (ICE) and local police departments that has led to rampant racial profiling and abuses, to treat inmates in jails with dignity, and to restore justice to the people of Maricopa County.

This fight for human rights did not begin last week at Netroots. Current and former undocumented people, those in mixed-status families, people of color, and groups like Puente Arizona, the Colibrí Center for Human Rights, and No Más Muertes have been fighting for years to put a stop to cruel attacks on migrant and marginalized communities. Projects like #AZDispatch are exposing some of the most unjust practices in our current immigration system and elevating the stories and voices of those fighting back against those practices.

For some of us in Michigan, the immense humanitarian crisis that is happening within the boundaries of the United States might not be our immediate reality (although racial profiling and deportations are affecting people and families across the country including in Michigan), but that does not mean that we can turn a blind eye to what is happening in places like Maricopa County. Pay attention to what is going on and get involved with groups in our state like Michigan United who are taking action as injustices against migrant communities continue. The latest involves conservatives trying to dismantle sanctuary cities, like San Francisco, that act as a safe space for migrants.

An injustice anywhere is a threat to justice everywhere. Even if you’re not directly impacted, it’s on us to stand together as allies and work together to end racism and oppression.