It’s Not Just The Police 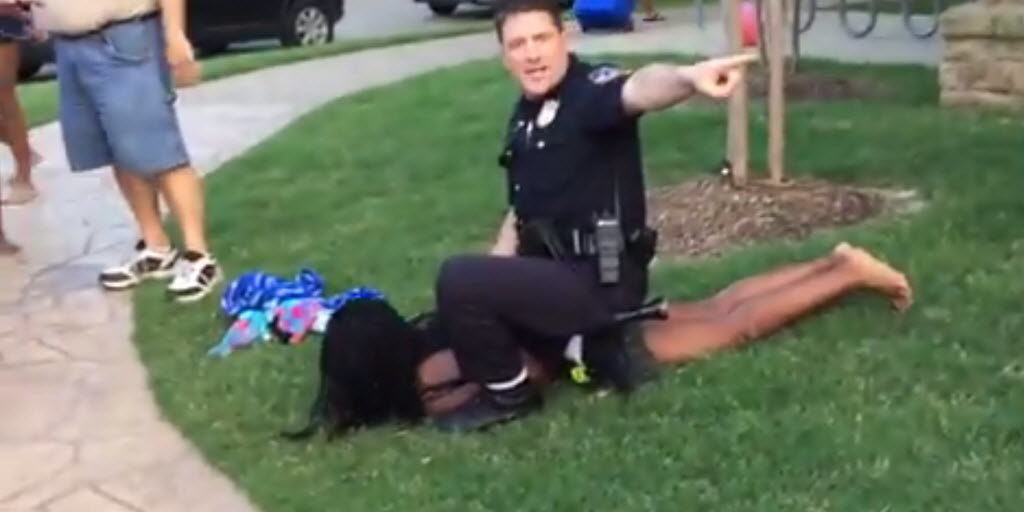 Police in McKinney, Texas are facing national outrage after one of their officers was caught on video assaulting and threatening to shoot unarmed black teenagers at a pool party. But the video does not simply show another case of excessive force, as media reports would suggest. It also reveals the significant support these tactics enjoy among white Americans – and why the responsibility for police brutality extends far beyond the trigger-happy cops themselves.

The media’s focus on lone officer Eric Casebolt, who has since resigned, serves to obscure a larger pattern of white complicity in state violence. At the McKinney pool, white residents taunted black partygoers, telling them to go back to their “Section 8” homes before attacking a black girl and calling in the police to forcibly segregate their neighborhood. Indeed, the video shows white residents assisting the police, at one point even holding back bystanders while an arrest is made. Afterward, residents posted a sign thanking the officers for keeping them safe.

This popular enthusiasm for brutal policing is not isolated to a single Texas suburb. Nor can it be written off as a uniquely Southern phenomenon, a lingering stain of slavery and Jim Crow. From Ferguson to Baltimore to Cleveland, the violent enforcement of racial segregation has always been a national affair. As Malcolm X observed half a century ago, “As long as you’re south of the Canadian border, you’re south.”

This helps to explain a recent NBC News/Wall Street Journal poll in which 58 percent of white respondents dismissed the Baltimore uprising as “people seeking an excuse to engage in looting or violence.” By contrast, 60 percent of black respondents cited police misconduct as the cause of the rebellion. Nationally, it is the McKinney mentality – in its authoritarian police worship, its fear and disdain for perceived black criminality – that dominates mainstream political discourse.

The white community’s embrace of state violence in McKinney hints at a stark truth: the police could not continue operating in this manner without at least the tacit support of white America. The epidemic of police violence we are witnessing today would not be possible without its civilian enablers: the juries who acquit violent cops, the people who blindly insist we live in a “post-racial society,” the 911 callers for whom the police offer an expeditious way of resolving disputes with their black neighbors. Police brutality is bigger than the police. It is an indictment of the society that sustains it.

As calls for criminal justice reform grow in volume, the largest obstacle to structural change may not be the power of police unions or private prison contractors, but a public that largely approves of what is done in its name. In the face of widespread indifference or hostility to the Black Lives Matter movement, policy fixes – like ending police militarization or stop-and-frisk – can only go so far in curbing police violence. Until white communities come to terms with the depth of their support for police violence and work to disinvest from these power structures, the violence will continue unabated.