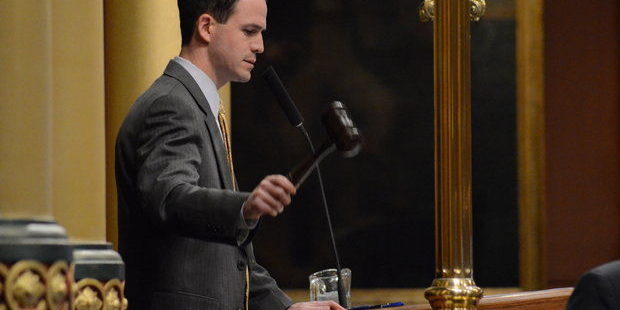 Term limits were sold to Michigan voters as a way to oust legislators with experience and get citizen legislators making our laws. Since term limits have been in place, we’ve had a system where staffers and lobbyists have the knowledge, while the learning curve for new lawmakers is steep.

But we’ve never seen a Speaker of the House in over his head as much as Speaker Kevin Cotter seems to be. Twice in his first months in power, Speaker Cotter has been involved in two amateurish episodes that should make everyone question his ability to lead.

First, Kevin Cotter caused an uproar by refusing to allow Rep. Brandon Dillon to be seated as the Minority Vice Chair of the Appropriations Committee. His reasoning for not seating Dillon was that Rep. Dillon, in his role as Democratic campaign chair, did the unthinkable deed of actually trying to elect a Democrat to Cotter’s seat. Because Cotter decided to put his thin skin ahead of developing relationships across the aisle, the House spent too much time on a partisan fight that could have been avoided.

On Thursday, Speaker Cotter informed State Representative Cindy Gamrat that she was no longer welcome in her own caucus. The reason for her ouster, according to reports, is that she had the nerve to voice opposition to the Republican budget on social media while sitting in a caucus meeting. Rep. Todd Courser made similar complaints on social media as well, but he has not been ousted from the inner sanctum of Cotter’s caucus, at least not yet.

Real leaders don’t handle things like this. But, just months into his one and only shot at being Speaker of the House, Kevin Cotter seems to have lost control of the chamber. Time will tell if Cotter is able to get a grip on his job and look more like a leader than a child who wants to take his ball and go home. The sad part is that our state hangs in the balance while amateur hour continues.