Barron used the typical “blame the victim” rhetoric using no more evidence than a photograph as “proof” that we should forgo justice because he thinks the victim was criminal. This type of racial bias has plagued prominent national stories regarding shooting deaths of young black men over the past several years.

National campaigns like #BlackLivesMatter and #IfTheyGunnedMeDown highlighted the problem of the national media portraying the deaths of young black men, like Trayvon Martin and Michael Brown, as something that was deserved even before investigations had concluded. This type of victim blaming only stokes racist stereotypes about young black men.

Below is what Barron posted to his wall:

I dare the LSJ TO PUT THIS ON THE FRONT PAGE! As opposed to the cheery photos they did run….
No wonder so many 20 somethings fall for the “Victim Narrative”… even the local paper seems amazed when horrible choices result in horrible consequences!
I ask out loud again… how many of you think it is within normal boundaries to have “friends” die in midnite drug related shootings?
Its amazing to me i am criticized for pointing out the obvious.. THESE WERE NOT VICTIMS THEY WERE VOLUNTEERS…

The post included an alleged image of Smith holding a water pipe and giving the middle finger to the camera. A screenshot of the Facebook post can be found below.

The “cheery” photos that Barron is addressing ran in a Lansing State Journal piece about the life and death of Smith, who was a father of a 2-year old daughter and aspiring rapper. The Lansing State Journal piece did well in telling Smith’s story in the wake of his death, highlighting his family and interests, rather than jumping to conclusions about Smith’s involvement in the shooting. The story featured photos of a smiling Smith pictured with his daughter. The story indicated that police do not yet know why the shooting occurred.

“It’s extremely disappointing to see a prominent Lansing figure like Tim Barron using racist tropes to justify the death of a young man while a murderer is still at-large,” said Sam Inglot, communications specialist with Progress Michigan.  “Similar character assassinations were made during the investigations surrounding the deaths of Travyon Martin and Michael Brown and only served to fuel racism and victim blaming. Barron’s post is insult to the memory and family of Michael Smith and he needs to apologize immediately.” 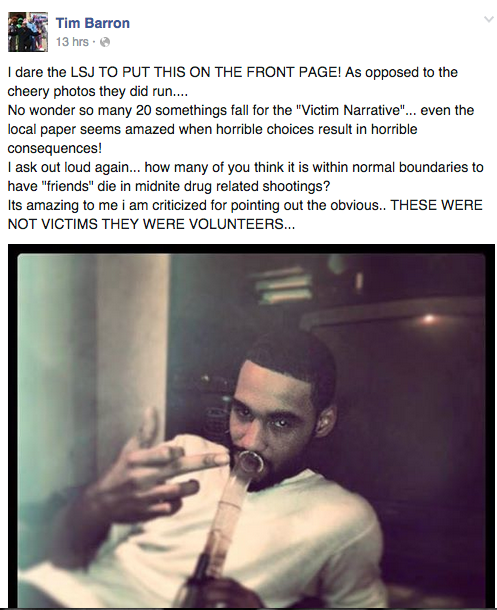