This Week in Progressive Blogging:

Eclectablog: Everything that’s wrong with the debate over marriage equality in one screenshot

Democracy Tree: The Detroit News Overstates the Value of Privatization

The biggest news of the week has been President Barack Obama’s announcement that he’ll be taking executive action to temporarily address our nation’s broken immigration system.

Here are some facts on the plan: 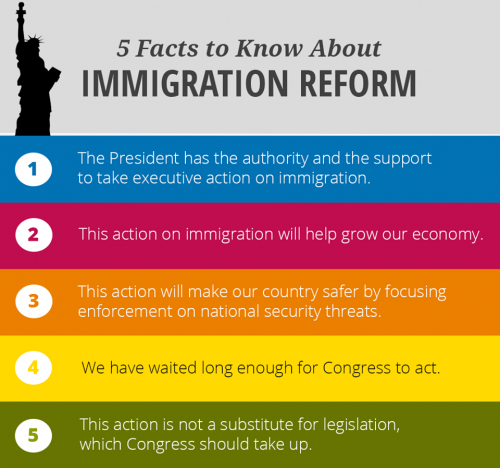 We applaud the President’s actions and are thrilled for the tens of thousands of Michiganders and their families who can finally breathe a sigh of relief that they will no longer have to live in fear of deportation.

The President also sent conservatives who are challenging him on his priorities and legal authority a very strong message:

“To those members of Congress who question my authority to make our immigration system work better … Pass a bill.” —President Obama

Here is a sampling of some of the reactions to the President’s announcement. The progressive community was rightly thrilled by the action, but we all know that more needs to be done.
Attorney General Bill Schuette (via Facebook):

“America must have a hopeful immigration policy, a policy of inclusion not exclusion. America’s door of opportunity must be open to new citizens. The door to America’s unique experiment of freedom and enterprise must be open and welcoming to new Americans.  “However, President Obama seems to be more interested in gamesmanship and litigation than working on bipartisan solutions to immigration reform. By ignoring Congress and stretching Executive Orders beyond Constitutional limits, President Obama is clearly playing politics instead of providing lawful solutions to immigration challenges. The result is gridlock and lawsuits, just what the American people voted against in 2014.”

Schuette’s language is painfully ironic considering that his extremist past has been riddled with nothing but political “gamesmanship” and “litigation” that is not only expensive, but hurts Michigan.

Gov. Rick Snyder: Silent
This is not a joke. Our Governor, who has consistently said he supported immigration reform and touted immigration as an economic engine, is silent on the fact that tens of thousands of Michiganders will soon be able to come out of the shadows. There wasn’t a single tweet, Facebook post or statement sent from what I’ve seen. If I’m wrong, someone please let me know.

Is this a party issue? Or does Gov. Snyder not actually care about immigrant families?

Here are some other reactions:

Forget The Pundits: Reactions To Obama’s Speech From The Immigrants Who Are Actually Impacted

Now Fox & Friends Is Upset That Obama Is Quoting Scripture
(I found this one particularly shameful.)