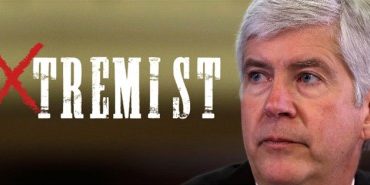 There are a lot of extreme conservatives running for office in Michigan this year. But one rises above the rest. Not for his rhetoric (we’ll leave that to the likes of Gary Glenn), not for his public positions (we’ll leave the odd ideas with Terri Lynn Land) or even for his personal conduct (cough, cough Jordan Haskins).

In reality, Michigan’s most extreme candidate is the man with a resume of extremism. That candidate is Gov. Rick Snyder.

Sure, Terri Lynn Land wants to trust coal-dependent polluters to clean up our environment and is in the pockets of the Koch Brothers. But Rick Snyder has actually implemented policies that have polluted Michigan. Ask the neighbors of Severstal in Dearborn. Because of Rick Snyder’s MEDC, Severstal is able to spew more pollution into its neighbors’ lungs.

That’s just one example of Rick Snyder’s environmental extremism. His record is so extreme that he received a failing score on Clean Water Action’s scorecard.

Conservatives have a history of opposing programs that help seniors. Paul Ryan wants to privatize Social Security and cuts to Medicare and Medicaid are almost always on the conservative agenda (as a matter of fact, conservatives opposed the creation of these programs.) But one candidate on this year’s ballot actually signed a bill that taxed Michigan’s seniors. That’s extreme. That candidate is Gov. Rick Snyder. While the rest of the conservatives want to hurt seniors – Snyder actually did.

Imagine if someone was on the ballot with a history of putting Michigan workers and communities in danger all in an effort to protect the contract of a large out-of-state corporation. There is this year – his name is Gov. Rick Snyder. When Rick Snyder took office, he decided to outsource jobs to a corporation from Pennsylvania called Aramark. He did so despite reports from states such as Florida and Kentucky that showed Aramark was problematic (watch our video for more details.) As we know now, Aramark employees have been caught smuggling drugs, been involved in sexual romps, and even a murder-for-hire plot. You’d think that a sensible moderate governor would cancel the contract. You would think, but it hasn’t happened.

The reason is that when it comes to public safety, Gov. Snyder has proven to be an extremist – far to the right of rule-of-law conservatives.

On issue after issue, Gov. Snyder’s record is one of extremism. The governor can stare into a camera lens and talk softly about his policies but the reality of those policies is of hard extremism. Rick Snyder is not a moderate or even a run-of-mill conservative. Rather, the past four years prove that Gov. Snyder is an extremist who is out-of-touch with Michigan values.