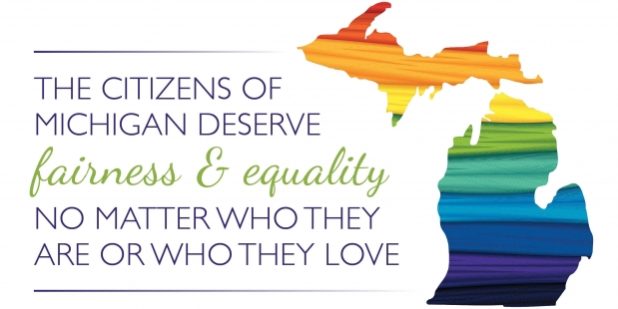 Did you know that under current Michigan law, a person can be fired, denied housing, or otherwise discriminated against because of their sexual orientation or gender identity?

That’s right. And what are Governor Snyder and conservatives in the legislature doing about it? Nothing. In fact, some of those legislators went so far as to attend a “No Gay Civil Rights” press conference at the Capitol this morning where speakers voiced their opposition to amending the Elliott-Larsen Civil Rights Act.

The Elliott-Larsen Civil Rights Act, Michigan’s non-discrimination law passed in 1976, states that individuals may not be discriminated against based on “…religion, race, color, national origin, age, sex, height, weight, familial status, or marital status…” It stops short, however, of including protections for sexual orientation and gender identity.

There is an easy and obvious fix to this and that is to amend the law to include sexual orientation and gender identity. Such an amendment would not only be morally just, it would place Michigan in a stronger position to compete economically while sending a message that our state is a place of tolerance and opportunity.

Despite the fact that an amendment is supported by a majority of Michigan voters, Republicans included, as well as by many major Michigan companies such as AT&T, Whirlpool, Dow Chemical, Blue Cross Blue Shield, and Google, Governor Snyder refuses to state an opinion on the matter and Republicans in the legislature will not advance legislation to address it. By declining to take a position on one of the most consequential civil rights issues of our time, Governor Snyder is not only allowing discriminatory practices to remain legal, he is perpetuating them.

Governor Snyder repeatedly states that he does not believe in discrimination yet in 2011 he signed a law barring public employers from offering “medical benefits or other fringe benefits” to domestic partners. Found to be blatantly discriminatory and subsequently struck down in federal court last year, it provides insight into just how far the Governor is willing to go to deny basic rights and benefits to same-sex couples.

Governor Snyder is clearly out of touch, but when it comes to the issue of basic civil rights, he has shown remarkable cowardice and lack of leadership ability. Deferring to the legislature as a means of avoidance is not governing and it certainly does not illustrate a sound understanding of what it means to represent all people.