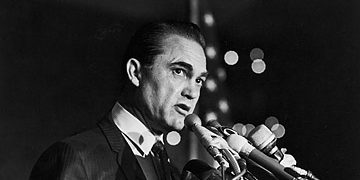 GLEP was called out for their tweet by multiple organizations including Progress Michigan. GLEP retreated and deleted the tweet.

We apologize for anyone offended by our post comparing @suptflanagan with George Wallace. It was inappropriate and has been removed.

However, they did not delete the prior tweets defending their comparison. Let’s take a look at each tweet and have some fun with their logic.

Meme explanation: Fact #1: Education reform is the civil rights issue of our generation.

Really? Allowing for-profit schools to operate without proper oversight is the civil rights issue of our generation? Not equal pay for equal work, marriage equality, income inequality or the continued defunding of education?

Meme explanation: Fact #2: The vast majority of those enrolled in charter public schools are poor and minority students.

Public schools should be high performing, competitive schools that prepare students for success. They should operate with accountability and transparency. Using race to defend their original race-baiting tweet is at best odd.

This one irritates me, because George Wallace blocked the integration of black and white students, while Flanagan is simply trying to hold for-profit charter schools accountable. The two are not even close to the same level.

GLEP should apologize for blocking real accountability instead of just retracting a tweet.