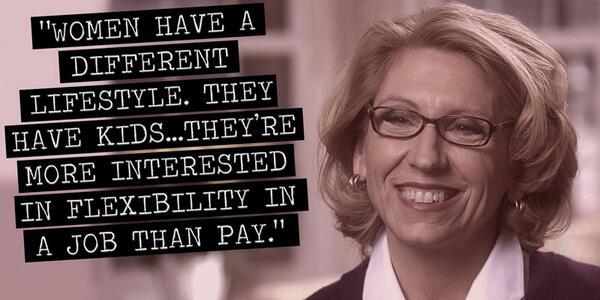 Land has stated that women don’t want equal pay for equal work because they would rather have workplace flexibility so that they can take time off to raise their children.

Not only does Terri Lynn Land dismiss the concerns of working women, she does so in a way that insults fathers as well.

Many fathers take as active of a role in raising their children as mothers do. To state otherwise, as Land did, proves she is out-of-touch with today’s working families.

In honor of Father’s Day, we decided to ask working fathers what they think of Terri Lynn Land’s policy views, and also what it meant to them as fathers who take pride in being an active member of their children’s lives.

“It’s hard to believe how out of touch you’d have to be to say that women prefer job flexibility over equal pay,” said Michigan State University Associate Professor and father of two, Mitchell Robinson. “I grew up in 1960’s and ‘70’s and Terri Lynn Land has this Ozzie and Harriet view of the world we live in, which I don’t think was even that common then. This lifestyle exists only in Terri Lynn Land’s memory.”

In a time when women now make up half of the workforce in America, workplace equality isn’t just about women wanting equal pay for equal work, it’s about families being able to financially run a household.

As Robinson said, “We would not survive without my wife working.”

The truth is, being paid unequally doesn’t just hurt women — it hurts the entire family.

Rob Tesmer, a working father of six from Howell, agrees.

“In today’s world, many families rely on both the mother and father working and sharing responsibilities inside and outside the home,” Tesmer said. “What’s the difference? Land seems to suggest that today’s families only consist of husband breadwinner and wife homemaker.”

“As a working father, I’m interested in flexibility because I want to be part of my family,” he said. “Why is Land singling out women as the only parent concerned with raising their family?”

Apparently, Land isn’t interested in supporting policies that reflect Michigan residents’ lives, and her uninformed viewpoints are hazardous to the family nucleus.

“Never in my life have I been told that I have to make a sacrifice that great: To choose between having a fair income or being a parent to my children,” Robinson said.

Women should not have to choose between one or the other, and Terri Lynn Land should not be advocating to further inequality.

“When my daughter was born, it became even more clear to me that no one will ever tell her what she’s going to do because of her gender, and that includes Land telling her she needs flexibility and should be paid less,” said small business owner and single father of two, Scott Harris from Holt.

It’s unfortunate to see a woman advocate against the rights of her own gender, but I wonder if Land personally knows the impact a reduced income can have on a family. Terri Lynn Land lacks the basic understanding of how today’s families function, which is apparent in her out-of-touch ideas about workplace equality.

Let’s be clear, Terri Lynn Land’s position on equal pay for equal work IS part of the ongoing war on women. More than that, her explanation is proof that she is out-of-touch with Michigan’s working families.