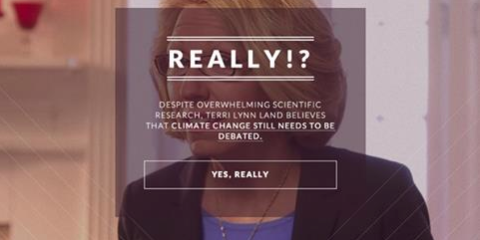 Since Terri Lynn Land has taken to platitudes when asked about some of her more questionable positions, we thought it would be a helpful public service to pull them together for interested Michiganders. There’s even a message from our good friends, “Corporate Oil” and “The Business Lobby” – try not to get it stuck in your head.

After months of campaigning, most voters still don’t know much about Terri Lynn Land except that she’s a woman, she’s supported by the Koch brothers and she used to run the Secretary of State’s office.

But that’s not all there is to know about Terri Lynn Land. She says that she grew up in a trailer park and learned valuable life lessons. She fails to mention that the trailer park and motel she worked at were owned by her family and that years later, Land bought the same trailer park where she grew up, evicted 170 families and tore it down to make a profit. That didn’t work, and the property now sits vacant.

Clearly, Terri Lynn Land does not understand the plight of the average worker if she’s willing to destroy a Michigan community so she can attempt to line her pockets.

In fact, she’s so out of touch that she doesn’t even believe that women deserve equal pay for equal work. Land believes women would prefer the flexibility to stay home with their children, despite the fact that their reduced paycheck for being a woman could potentially make them unable to pay their bills.

Speaking of not paying bills, Terri Lynn Land even went so far as to support shutting government down in 2013, costing us $24 billion (so much for fiscal conservatism.)