Put up or shut up 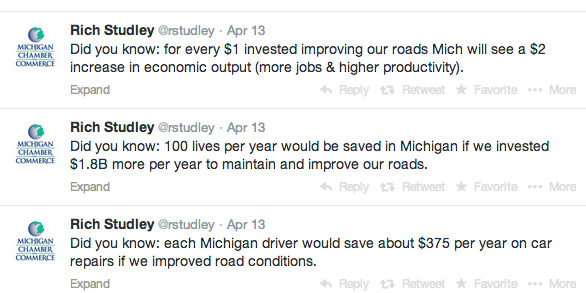 I won’t bore you by telling you how bad Michigan’s roads are, we all know they’re garbage. We need some serious investment in our infrastructure. Without it, our economy and public safety are in trouble.

Even corporate lobbyists like Rich Studley over at the Michigan Chamber of Commerce know that Michigan needs to invest in our roads. Mr. Studley laid out quite the list of facts the other day on his Twitter feed.

One of his tweets said: “Did you know: investing $1.8B per year in road & bridge maintenance and improvements would create 36,000 new jobs in Michigan.”

Here’s a proposition: If the Chamber and Mr. Studley are so concerned about the roads and worry that poor conditions hinder economic growth, why not just hand back Snyder’s tax giveaway?

According to @rstudley (Mr. Studley’s Twitter handle), Michigan ranks 50th out of 50 when it comes to road funding. Wasn’t there some Snyder campaign ad that said “Never again” regarding Michigan’s ranking?

Not only does Michigan fall on its face in terms of road funding, but Mr. Studley points out that putting $1.8 billion per year towards our roads would save 100 lives per year, create 36,000 new jobs and save Michigan drivers $372 per year on car repairs. What a bargain!

My question is, how about Mr. Studley and his business tycoon cohorts put up or shut up. Snyder gave them a $1.8 billion tax break without requiring they create a single good paying job and he paid for it by taxing workers and seniors.

Average Michiganders already were asked to sacrifice by paying more in taxes – even though not one dime of it went to fix our crumbling infrastructure. How about corporations and CEOs (which use public roadways to ship their goods and services) share in the sacrifice and pay their fair share for a change?