Between a rock and a Republican 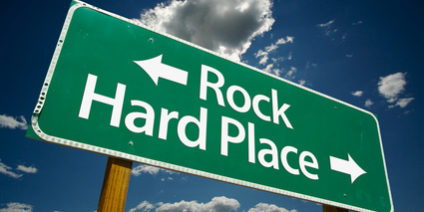 On one hand, Greg McNeilly married his longtime partner – his rock – Douglas Meeks (congratulations!) On the other, as a longtime Republican strategist Mr. McNeilly has to contend with the unfiltered bigotry permeating the Michigan Republican Party. Case in point: Dave Agema. As one of Michigan’s two Republican National Committeemen, Dave Agema proposed and the Republican party approved language defining marriage as between one man and one woman. When asked for his take on Greg McNeilly’s marriage, Dave Agema said as much:

“I know what the Republican platform is and it says that marriage is between a man and a woman,” Agema said. “It’s obvious he doesn’t agree with the platform, and he’s going against it or trying to change it.”

After the 2012 elections, Republicans commissioned a report asking (and I’m paraphrasing here) why they got trounced at the polls. Among other recommendations, the report urged Republicans to soften their stances on certain issues, including gay marriage. Fast forward a year later, and Republicans are still having trouble reconciling their desire to win with their desire to codify the Bible into law. You could say they’re stuck between a rock and a hard place.

Just as important, Mr. McNeilly envisions a Republican Party where this isn’t an issue at all:

“It comes back to that crucible of why are we allowing government to regulate matters of the heart. It can’t do it,” McNeilly said.

So kudos to Greg McNeilly for standing up for equality; and shame on Dave Agema for making him have to. Now is the time for Gov. Rick Snyder and A.G. Bill Schuette to drop their appeal and remove Agema and his ilk from party leadership. Make sure everyone knows just how crazy Dave Agema is by voting for him in the March Badness tournament by sharing him on Facebook and Twitter!