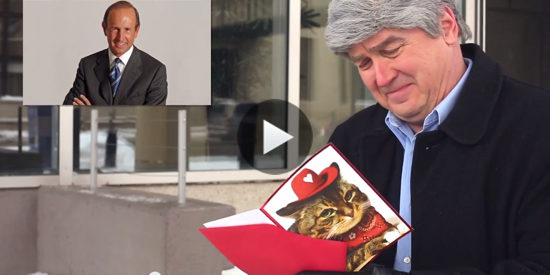 If you’re one of those people who think Valentine’s Day is just another corporate marketing holiday, the Fake Rick Snyder might tend to agree with you. But Governor Rick Snyder LOVES corporations — and his public displays of affection with business at the expense of the middle class could make you sicker than eating that entire heart shaped box of Russell Stover’s.

That’s why to commemorate Valentine’s Day, we released a video featuring the Fake Rick Snyder writing a love letter to Dick and Betsy DeVos — conservative billionaires who paid for the push for Right to Work and have bank rolled numerous conservative campaigns in Michigan.

Snyder’s tenure in office has resulted in billions of dollars in unaccountable tax giveaways to big businesses while pushing higher taxes on seniors and families, as well as axing funding to our neighborhood schools.

Snyder gave himself and other Michigan conservatives a great Valentine’s Day gift this year when he decided to sign legislation that doubles campaign finance contributions and allows wealthy donors to have even more influence in Michigan politics.

Along with the doubling of campaign finance contributions, “Snyder’s Corporate Love Affair” highlights issues like the DeVos-funded push for Right to Work and Betsy DeVos calling on RNC Committeeman Dave Agema to resign when Snyder remained silent.

This Valentine’s Day, bring your loved ones close, look them in the eye, and remember how little Snyder actually cares about them and their future. Then, power progress in Michigan by donating today.