All I want for Valentine’s Day is Rape Insurance 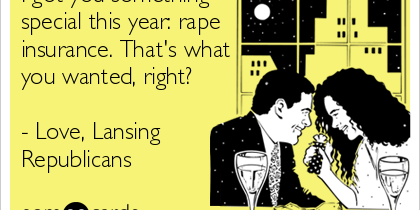 A few months ago, the conservative-led Michigan Legislature rushed through and passed a bill banning all insurance plans throughout the state from covering abortions and miscarriage surgeries. Next month, all Michigan women will now have to purchase a separate abortion rider to protect their health — and their bank accounts — from the possibility of rape and other potentially medically necessary procedures.  This law makes no exceptions, not even for cases of incest. The worst part is many of these so called “abortion riders” do not exist on current insurance plans and in other states that have enacted similar laws, they have remained unavailable.

This is the legacy of Michigan’s conservative legislature.

This is not just an attack on women — it is an unwarranted invasion of privacy by the government into the private health care decisions of Michiganders. How’s that for “small government” conservative ideals?

There hasn’t been much attention paid to this issue since the law initially passed. In an election year, the conservatives who supported this right-wing assault are hoping we will forget this attack on women’s rights. Unfortunately for them, we will not. We’re going to fight back.

RSVP here for our Progressive Friday event. Our guest speaker will be Libby McGaughey, Vice President of Planned Parenthood of Michigan. Libby will be filling us in on the state of women’s health in Michigan, which we all know is currently under attack.

Space is limited, so RSVP and make your donation online TODAY!