We want a quarterback, not a punter 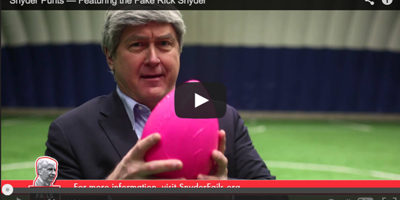 Michiganders want a leader, not someone who will dodge tough questions and accountability. Unfortunately, Gov. Rick Snyder is the latter.

This weekend, Gov. Snyder aired another Super Bowl ad touting his performance as Michigan’s governor and his bid for re-election. The cost? A cool $500,000. And you can bet your bottom dollar Snyder isn’t spending half a million to explain why he raised taxes on working Michiganders and seniors, punted on equal pay for equal work, and repeatedly failed to stand up for LGBT individuals. Nope, but that’s why we have the Fake Rick Snyder — and he’s gonna set the record straight.

We put together our own Super Bowl ad featuring the Fake Rick Snyder, and we need you to get it in front of as many Michiganders as possible. While we couldn’t afford airtime during the Super Bowl, like our corporate-sponsored governor, we do have one thing he doesn’t have — the truth. And that’s what we set out to tell in this video, albeit in a light-hearted way.

Snyder has a long history of dodging tough questions and giving flat talking points when pressed on serious issues.

Gov. Snyder said raising the minimum wage would be a “challenge,” while giving massive pay raises to the state’s investment officials, nearly doubling the chief investment officer’s pay from $175,000 to $330,000. That’s ridiculous, unfair and unacceptable.

Adding insult to injury, Snyder refused to commit to backing equal pay for equal work, saying he needed all of the “facts.” Well Gov. Snyder, the facts are clear: women make $0.77 on every dollar a man makes – and that’s just not right. Hopefully Gov. Snyder got the facts from President Obama, who said it straight, “Women make up about half of our workforce. But they still make 77 cents for every dollar a man earns. That is wrong, and in 2014 it’s an embarrassment.”

Make sure Michiganders know what Gov. Snyder is really about by donating $5, $25, or $50 today.