The company you keep

It’s going to be hard for Rick Snyder to keep up his campaign charade as a moderate. With friends like the ones he’s attracting in Washington, he’s being exposed for the right-wing politician he is every day. 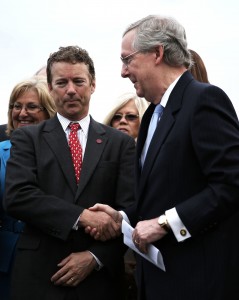 United States Senate Minority Leader Mitch McConnell (R-Ky.) and Sen. Rand Paul (R-Ky.) were two key players in the recent government shutdown. A political stunt that cost the country $24 billion in economic activity and left federal employees wondering how they were going to feed their families.

Here’s what Gov. Snyder had to say about the shutdown:

“It’s a disappointing mess,” he said. “I don’t blame one side or the other. This is a broken political system.”

While trying to distance himself from his conservative brethren, Rick Snyder actually happens to know a thing or two about broken political systems.

Remember when he rammed Right to Work through the lame duck legislature? Snyder signed a bill that went through no committee process, while at the same time locking thousands of people out of the Michigan Capitol. That’s how politics work under Snyder.

It turns out Snyder’s Right to Work assault on working families has garnered the attention and admiration of the McConnell-Paul Tea Party duo.

The two have proposed an amendment to a LGBT nondiscrimination bill that would make Right to Work a national policy — and they’re looking to Snyder as an example.

“Speaking on the Senate floor Tuesday, McConnell praised Michigan Gov. Rick Snyder (R), who signed the state law in December after it was fast-tracked through the Republican-controlled legislature. McConnell said he and Paul were following Snyder’s lead.”

Right to Work in Michigan has produced no evidence of job growth, but what’s significant is that two of the premier hard-right politicians in this country are looking at Rick Snyder as an example.

This is just another example of what we have known about Snyder since he began signing legislation: he’s a right-wing, corporate-sponsored politician who favors giving $1.8 billion in tax breaks to big businesses while defunding neighborhood schools and pushing higher taxes on seniors and families.  He can claim to be a moderate all he wants, but the truth is in the company he keeps.