A tale of two plates

Legislation has been introduced to require license plates on the back and front of all cars in Michigan. Laws like this across the United States are not uncommon. Thirty-one other states already have similar laws on the books.

In fact, the bill’s sponsor, Sen. Tupac Hunter, says the bill would be an asset to public safety.

“This is a simple bill that could have a significant impact on deterring crime and catching perpetrators throughout this state,” he said. 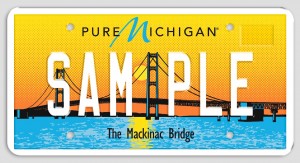 I don’t doubt the fact that Sen. Hunter’s bill would help aid law enforcement in the apprehension of criminals and I’m supportive of the idea.

But I’m not worried about the doubling of license plates. What is worrisome about the legislation are the numerous privacy concerns it raises.

Automatic license plate readers (ALPRs) are high-speed cameras mounted to police cruisers that are capable of snapping photos of license plates from a multitude of angles. The photos are then stored in a database along with a date, time and GPS location of where the photo was taken.

This type of technology is on the rise among police department across the state and country. The ALPRs are used to track down stolen cars and apprehend criminals. But there is a problem with the proliferation of this type of equipment.

There is a major lack of laws and regulations among police departments regarding the use and retention of the data that is collected. The American Civil Liberties Union has already expressed concern about the unregulated use of ALPRs.

When a ALPR is used, it’s not snapping a few dozen photos in a day. It’s taking hundreds and maybe even thousands per patrol, depending on the traffic.

Each one of those photos is attached to a driver’s identity and each photo taken is another data point from your life that goes into a police database.

Sen. Hunter’s bill is not concerning on its face. But what is concerning is that if this bill passes, and police departments are still allowed to use ALPRs without proper regulation, then data on thousands of law-abiding Michiganders’ would be collected without scrutiny.

If the recent NSA debacle is any indication of how the people of Michigan and the U.S. feel about their lives being warrantlessly tracked, then needlessly increasing the unrestrained use of ALPRs is recipe for disaster when it comes to civil liberties.

If there are going to be more license plates on the road, while at the same time more police departments are acquiring ALPRs, then Michigan needs tough, transparent laws as to how the data is used and how long it is stored.

Rep. Sam Singh has already introduced a bill that would put such precautions in place.

Michiganders have the right to a reasonable expectation of privacy, whether their at home, on the computer or driving to a doctor appointment.