Last week, Progress Michigan gave you a taste of what it was like to party with Michigan Republicans.  Now we’d like to give you a sample of what was actually said by conservative “leaders” at the conference.

In the Grand Ballroom for breakfast on Saturday morning, Attorney General Bill Schuette said  he was proud to be Michigan’s anti-choice, anti-gay rights attorney general. 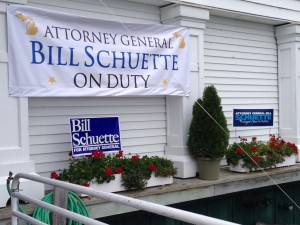 What’s most disturbing was his use of the word, “proud”.  Schuette is proud to tell same-sex couples that they do not have the right to marriage. Schuette is proud to stomp on their American liberties. And he’s proud to disregard the beliefs of those he was elected to represent, as a majority of Michiganders now support same-sex marriage.

During the “Michigan Leading the Nation” panel, Lieutenant Governor Brian Calley jokingly stated, “I thought this job would be more glamorous.” Unfortunately for Lt. Gov. Calley, he works for a state that is trying to recover from the worst economic recession since the Great Depression. For Calley, if he was serious about representing Michiganders and improving our state he wouldn’t be concerned about the perks of the job, he’d care about improving the lives of Michigan’s citizens. Struggling Michiganders who live with less than Calley couldn’t care less about the glamor status of their jobs. They simply want decent jobs and livable wages to provide for their families. Michiganders know that we’re nowhere near the verge of “the greatest comeback the nation has ever seen”  under the current administration and conservative-dominated legislature.

Later, while at a Terri Lynn Land event, I witnessed a Michigan Republican Conference attendee state that in order to vote American citizens should have to take a literacy and IQ test. Apparently only those who are deemed educated enough are worthy of voting, never mind the right to vote guaranteed to all citizens by the United States Constitution. Johnson, is obviously in bed with this notion as she continuously pushes for voter suppression laws and is inundated with lawsuits for her misdeeds to the detriment of Michiganders.

The one resounding question coming through all of this noise is where is the representation? Who in this administration is working for the people of Michigan? And an all-important third question, when can we get them out of office?