We’re not saving money in the “classic sense” 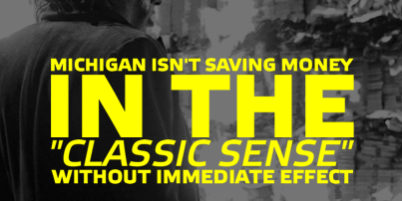 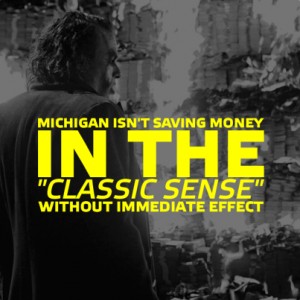 When people pride themselves on being fiscally conservative, you expect them to be fiscally conservative. So when Tea Party crackpots bested their establishment brethren and passed Medicaid expansion without immediate effect, costing Michigan taxpayers $630 million in the process, we were shocked.

For example, when Gov. Rick Snyder said Right to Work was “not on my agenda,” he didn’t mean it in the “classic sense,” he meant it in the “modern sense” – meaning that it was at the top of his list. Likewise, when Rep. Lisa Lyons said she had “a proud union family,” she didn’t mean it in the classic sense, but in the modern-seek to exempt her own husband from Right to Work while claiming it’s good for Michigan’s workers-sense.

Conservatives have long claimed that Obamacare will bankrupt our children and kill our “freedom”. That’s why they’ve wasted taxpayer dollars casting dozens of meaningless votes seeking to repeal it after all three branches of government gave it the OK. Medicaid expansion in Michigan is no different. By fighting tooth and nail to obstruct the Affordable Care Act because it’s expensive, Michigan’s Tea Party fever swamps managed to make it even more expensive.

The bill Michigan taxpayers have to pay? $630 million. That’s what far-right lawmakers call saving money in the modern sense.