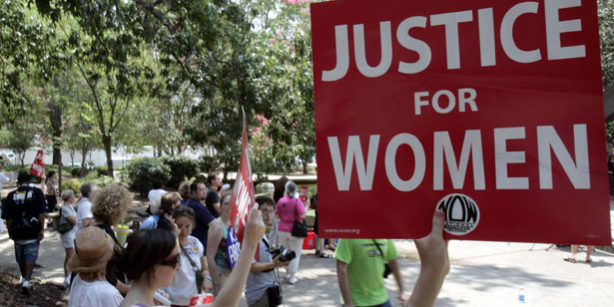 Yesterday reports emerged that anti-choice groups are launching a ballot drive to revive their failed attempt to ban health insurance plans from covering any abortions, even in case of rape and incest. This extremist proposal was vetoed by Gov. Snyder last December, on the same day he signed another law imposing the most sweeping and intrusive abortion restrictions in the country.

But this isn’t a normal ballot drive that we can simply educate the public about and successfully defeat – like last year’s Tea Party proposal to protect billionaire and wealthy special interest tax breaks and loopholes. No, the anti-choice extremists don’t even want to see this proposal reach the ballot.

All they need to do through the citizens’ initiative process is collect 258,088 signatures – a number equal to 3.48 percent of all registered voters in the state – and Republicans in the legislature can simply pass the initiative without a signature from Gov. Snyder.

As if this cynical and anti-democratic ploy wasn’t bad enough on its own merits, even the name of their ballot committee is based on a lie. They named it “No Taxes for Abortion Insurance,” but the initiative would go further than simply banning tax dollars from being spent on abortions, which is already banned several times in federal law. It would also mandate that regular private insurance plans cannot cover any abortions, which is exactly what Gov. Snyder singled out as problematic about the bills the last time they tried them.

Incredibly, it gets worse. The bill would again go further than federal law, even banning abortion coverage in cases of rape and incest. So 3.48 percent of Michiganders would essentially be telling women that they are required to buy extra health insurance, in case they are raped and decide they don’t want to carry their rapist’s baby.

This plan was undoubtedly hatched by the same Lansing Republican bosses who have pushed mean-spirited plans targeting retirees, middle-class families, homeowners, working men and women, and state employees. It amounts to a blatant attack on women, forcing them to pay more for care that they could need at any moment, without any advance notice. We’re committed to working hard to educate the public about their latest attack on the rights of women, so they can’t even convince 3.48 percent of Michiganders of their lies.