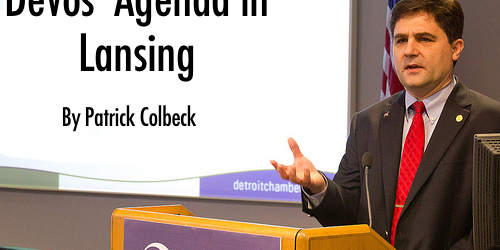 Sen. Patrick Colbeck has been a particularly entertaining member of the legislature since starting his political career in January 2011. Unfortunately for his constituents, that doesn’t always result in the best policy outcomes. But Progress Michigan is committed to holding Lansing politicians accountable – so we’ve collected the following list to call out Sen. Colbeck for his extremist rhetoric and voting record.

1. Wrote a column saying we needed to repeal the Michigan Business Tax – then voted against the bill that did just that.

After voting no on House Bill 4361, he immediately voted to give the bill “immediate effect.” Why would Sen. Colbeck vote to immediately implement a bill that he opposed? Because he didn’t oppose it, he just couldn’t be on record supporting a tax increase on Michigan’s seniors and middle-class families.

2. Complained at a constituent coffee hour that he took a pay cut to run for office.

Yes, the radical Tea Party conservative Sen. Colbeck, who once proposed cutting the pay of every state, local, K-12 school and university employee (a move that would have been completely unconstitutional) by $5.7 billion, whined that his $90,000 taxpayer-financed salary was a pay cut.

3. Told a Tea Party group that so-called “right-to-work” only passed because of cash from billionaire Amway heir Dick DeVos.

You know, we kind of knew that already. But it’s amazing what Lansing politicians will say to radical Tea Partiers when they think no one is listening.

4. Took $8,000 in campaign cash from members of the DeVos family within days of voting yes on so-called “right-to-work” legislation.

I’m going to hand this one over to our good friend Chris Savage at Eclectablog, who first spotted Sen. Colbeck’s Facebook posts:

Tyranny must be fought with everything we have, even if it means spilling blood. However, what we have in this country today is so far removed from tyranny that those ranting against it simply reveal themselves as the ignorant hypocrites that they are.

6. Introduced a bill (copied-and-pasted from Michele Bachmann) that bans school employees from censoring instruction in American history or Michigan history.

Is this a problem in the United States in 2013? Only if you ask fake historians like David Barton and Tea Party radicals like Michele Bachmann and Patrick Colbeck.

7. Claimed a bill restricting teachers’ collective bargaining rights and tightening tenure requirements was “a very momentous day in the progress of education…a victory for the children of Michigan.”

The bill is based on a template pushed nationally by corporate education “reform” crusader Michelle Rhee and her lobby group StudentsFirst. This prompts the obvious question: Sen. Colbeck, how can you claim to put students first if you’re putting teachers last?

8. Sponsored a bill to allow unlimited cyber schools in Michigan, with no quality controls.

The bill allows for-profit online schools to get the same foundation grant as community schools, despite a dismal track record in the state and the fact that they don’t face the same costs for the physical building or staff costs as community schools. Sen. Colbeck likely picked up some of his ideas about education from his experience as Treasurer for Canton Charter Academy, a school run by National Heritage Academy – which was founded by Snyder booster and Republican fundraiser J.C. Huizenga. Naturally, Gov. Snyder expressed concerns about the bill…before signing the same version he expressed concerns about.

On David Barton’s radio show (remember him?), Sen. Colbeck said “divine providence” and “biblical principles” ensured that Republican politicians would be able to pass a law banning union shops in the state.

10. Used shoddy and misleading numbers in a campaign mail piece, drawing a foul from the Michigan Truth Squad.

Sen. Colbeck made several false statements about Michigan’s unemployment rate, “business friendliness,” and business regulations. He echoed then-candidate Rick Snyder by claiming Michigan’s business climate was ranked 48th – when even the conservative, Koch-funded Tax Foundation ranked it 17th at the time. And he didn’t provide any evidence that Michigan businesses were leaving to create jobs in other states.

11. Claimed he figured out a way to fix the roads without raising any new revenues.

Not only does Sen. Colbeck believe he was able to fix a problem in a few days of “back of the envelope” projections that career MDOT employees have spent years on, his silver bullet would require privatizing state parks and selling ad space on Michigan’s bridges and overpasses. He also says the state should use “economic growth” to raise revenue for roads – a concept that is literally impossible to predict, given the cyclical nature of Michigan’s economy, and every other economy in the world.