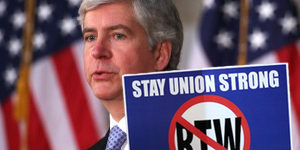 This morning the President and CEO of the Michigan Economic Development Corporation, Michael Finney, appeared on Frank Beckmann’s radio show to spend five minutes preaching the virtues of Michigan’s new “right-to-work” law. Finney went so far as to claim that half of all businesses looking to relocate won’t even consider states that are not RTW.

This is in stark contrast to Gov. Snyder’s admission that RTW is “irrelevant” to Michigan’s economy:

“Over 90 percent of the jobs that you’re looking at aren’t going to be in a situation where right to work is even relevant,” Snyder said in the hotel’s Ambassador Ballroom.

“To get a good job now in the state of Michigan you have to have a good K-12 education and then you have to get training beyond,” he said. “How many of those jobs are actually going to be union jobs? Really you shouldn’t be worrying (about right to work). Worry about getting that good education and building your own personal skills so you can get a good job. I think the future is going to be making sure that our youth is educated for the need.”

Of course, they’re right. If RTW was really an economic silver bullet, every state in the country would be scrambling to keep up with Arkansas (RTW since 1947) or Kansas (RTW since 1958). In reality, it’s nothing but an attack on unions, meant to drive wages and quality of life down in a race to the bottom. What Lansing politicians should be doing is creating jobs and investing in education – but they’d rather focus on partisan attacks.

Listen to Finney’s claims this morning: