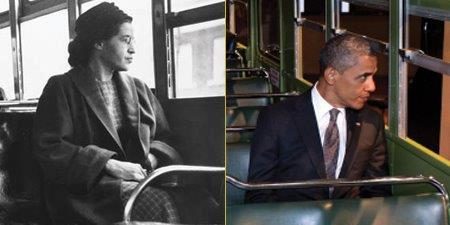 Parks refused to give up her seat for a white passenger and was arrested for breaking Alabama’s segregation laws.  The monumental event led to a boycott of the Montgomery bus system that lasted over a year and shed light on the injustices that were occurring across the nation, including places like Detroit, Michigan where Parks resided for the latter part of her life.  Parks continued to work for equal rights while she lived in Michigan, knowing her work was never done.  Great strides have been taken, and while things have progressed in the right direction, still more needs to be done.

Equality seems so basic and obvious, yet we often take it for granted.  It is important to honor those like Parks, who fought for these human rights by continuing their ongoing battle.  Those close to Parks have said she believed all were equal, no matter their race, gender, or class, and that her refusal to give up her seat was simply an expression of who she was, a human being no different from any.

Parks was different though.  She may not have led rallies or gave rousing speeches. Her legacy may stem from a simple activity that any of us could take for granted.  Sitting on a bus after a day of work is hardly something that we would usually take notice of, but often the little things are what is important in life, often actions speak louder than words, and often the most unlikely of people can be the most courageous of all.  Happy Birthday Mrs. Parks, and thank you.