Why is Benishek Running Away From One Nation PAC? 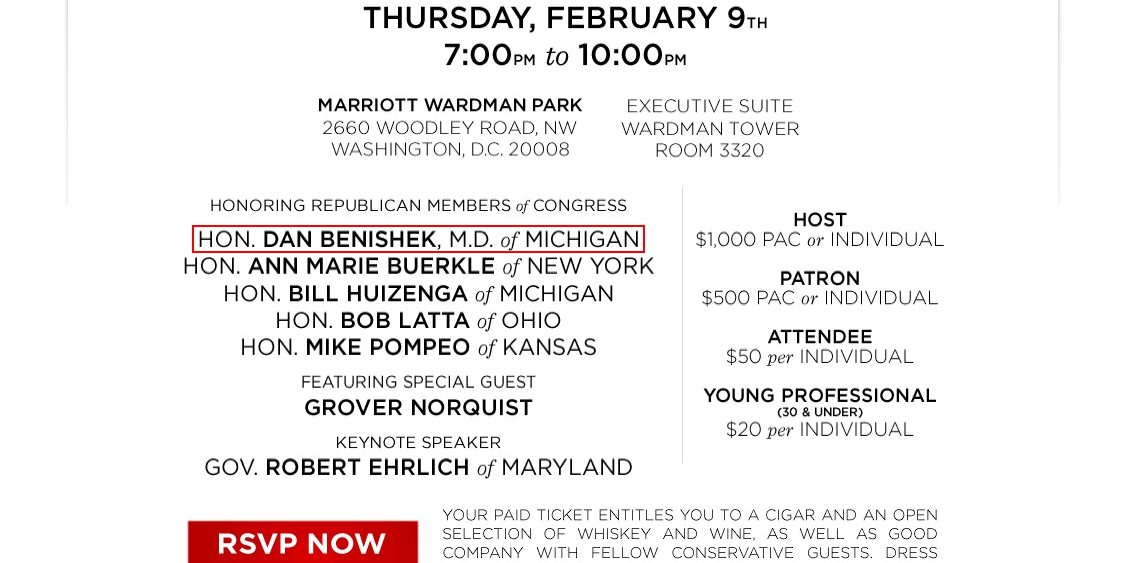 Listed as an honorary member, Congressman now says he doesn’t know a thing about being honored at controversial PAC fundraiser

LANSING – Despite being listed on the official event invitation as an honorary member on a $1,000 per host “Scotch and Cigars” fundraiser hosted by right-wing One Nation PAC in Washington, D.C., Congressman Dan Benishek is now back-peddling, telling MLive today that he never heard of the event.

Benishek, however, was honored last year at the same One Nation PAC event hosted annually during the Conservative Political Action Conference (CPAC). Last year’s invitation posted on the Sunlight Foundation’s website lists Dr. Benishek as one of three lawmakers associated with the event. One Nation PAC bills itself as a conservative political action committee dedicated to “conservative principles.” According to the invitation for the event, attendees are entitled to “a cigar and an open selection of whiskey and wine.”

“Dr. Benishek needs to come clean with his constituents and tell them why he’s headlining fundraisers in smoke-filled rooms instead of addressing their concerns,” said Mitchell Rivard, of Progress Michigan. “Despite being honored last year and being listed this year as an honorary member on the invitation, he claims he knows nothing about the event. Why is Dr. Benishek running away from his right-wing donors?”

The Michigan Nurses Association earlier today called on Dr. Benishek to donate $1,000 – the price to host the reception – to a local health care clinic in Michigan’s first Congressional District that serves low-income and families unable to afford health care coverage.

The Michigan Nurses Association represents more than 1,400 registered nurses who live and work throughout Benishek’s district, including at Marquette General Hospital, Chippewa County War Memorial Hospital, and Alpena Regional Medical Center. MNA members are working to improve the quality of life for all in Michigan with their Main Street Contract for the American People, a nonpartisan campaign asking Benishek and other elected officials to put the interests of Michigan’s workers and families above those of the greedy Wall Street CEOs and corporations who crashed our economy.