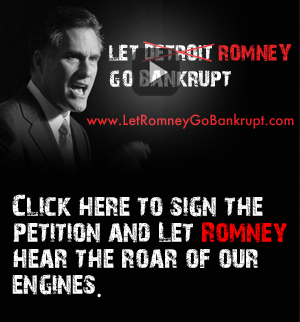 That’s what the CEO of AutoNation, Inc., the largest auto-dealer group in the U.S., said about Mitt Romney’s dangerous opposition to the auto rescue that was famously headlined  “Let Detroit Go Bankrupt.” And he’s right: If Romney had had his way, GM wouldn’t be posting its highest profit ever and thousands of Michiganders would be out of work.

Even more troubling, Mitt Romney is still trying to blame President Obama while taking credit for the auto rescue. Shame? Romney has none. Let’s make sure that Romney and every other political candidate gets the message from Michigan: the auto rescue worked and anyone who says otherwise is just plain wrong.

Even as he doubles down on these outlandish claims, conservative writers are calling him out on it – one writes that Romney’s stance on the auto rescue embraces a “conservatism that prefers ideology to reality.” Another says that Romney’s new twist on the same theme – that the auto rescue was “crony capitalism,” a giveaway to “union bosses” – goes too far.

Mitt Romney was willing to let Michigan go bankrupt. But it’s Romney’s reckless ideas about the auto industry and its recovery that should go bankrupt. That’s why we want everyone to send as strong a message as possible: Let Romney Go Bankrupt!

P.S. Support our campaign and send a strong message by making sure you get a Let Romney Go Bankrupt sticker while supplies last.