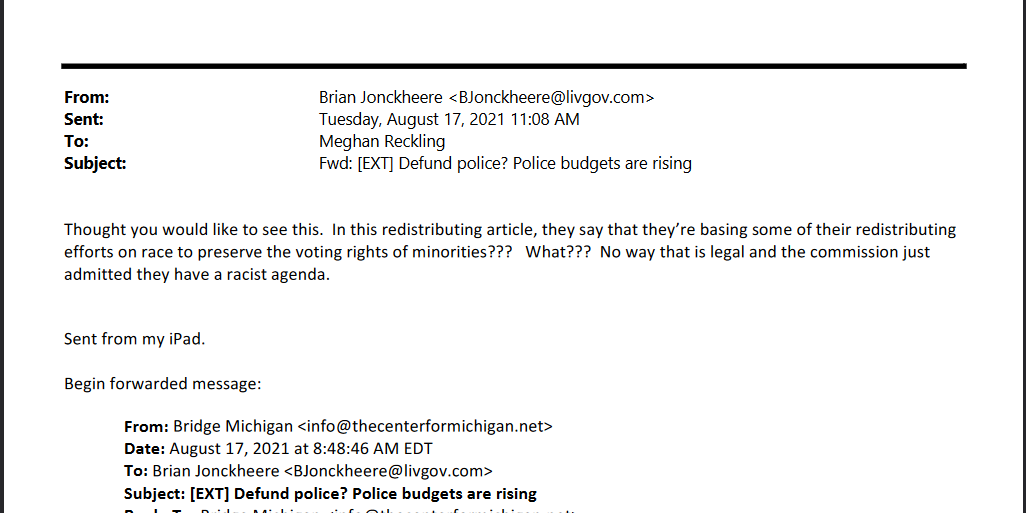 MICHIGAN – An email sent from Brian Jonckheere, Livingston County Drain Commissioner, to Meghan Reckling, the chair of the Livingston County GOP and chief of staff to State Senator Lana Theis, indicates a complete lack of understanding of the Voting Rights Act and its impact on the redistricting process in Michigan.

The email, sent August 17, 2021, from Jonckheere to Reckling, was obtained by Progress Michigan through a FOIA request. Jonckheere forwards Reckling an August 16, 2021 Bridge Michigan article about redistricting that discusses Michigan’s two majority-minority congressional districts, which are protected by the Voting Rights Act. The article states, “the redistricting commission has said it is committed to ensuring racial minorities have fair representation.”

Jonckheere’s email reads as follows: “Thought you would like to see this. In this redistributing (sic) article, they say that they’re basing some of their redistributing (sic) efforts on race to preserve the voting rights of minorities??? What??? No way that is legal and the commission just admitted they have a racist agenda.”

“When I read emails like this, it makes me both angry and happy. Angry that there’s such ignorance in our state from elected officials and happy because we’ve taken the redistricting power away from elected officials who spew such ignorance,,” said Lonnie Scott, executive director of Progress Michigan. “Experts have concluded the maps Republicans drew in 2011 unfairly diluted the voting power of Black voters in Detroit and the Redistricting Commission, rightly, is committed to drawing fair maps where every Michigander has an equal voice. The Republican pushback against the Commission has always been because the GOP can no longer gerrymander their way to power by suppressing the voices of minority voters. This email is just them saying the quiet part out loud.”

Meghan Reckling—whose response to Jonkheere, if such a response exists, was not included in the response to Progress Michigan’s FOIA request—has been a leading voice about redistricting among the Republican grassroots. Reckling has posted videos online about redistricting, hosted training webinars, and sent regular email updates out via her own list and the Livingston County Republican Party list, which included messaging that twisted the truth about how the Commission and redistricting works.

“Republicans in Livingston County and across the state continue to misrepresent and lie about the redistricting process and the Commission to serve their own partisan agenda,” said Scott. “They fought tooth and nail against creating the Independent Citizens Redistricting Commission and now they’re showing they’ll stop at nothing to fight the Commission’s efforts to create fair maps where every Michigander, no matter their race, has an equal voice.”