Yes, the Confederate Flag is Racist 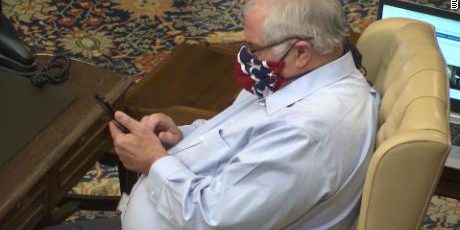 If you’ve ever stood outside our state Capitol, it’s hard to miss the statue that stands out front looking east down Michigan Avenue. For those that don’t know, the statue is of former Michigan Governor Austin Blair. Blair spent his life working to end capital punishment, fighting for women and black peoples’ ability to vote, and gathering money, resources, and regiments to fight against the confederacy and end slavery during the Civil War.

I can’t begin to think what Gov. Blair would’ve thought the day Operation Gridlock happened. Imagine working your entire life to bring equity and safety to the people of Michigan only to be let down generations later by people waving confederate flags and screaming obscenities about Governor Whitmer—a dedicated public servant trying to protect every Michiganian to the best of her ability, just like he did.

What makes it worse is the complacency around it all. Racist people are made to feel OK when their actions come with no consequences. For instance, on April 29 Senator Dale Zorn wore a mask that was very clearly a Confederate flag pattern on the floor during session. When asked about it, he initially denied everything, saying even “if it was a Confederate flag, we should be talking about teaching our national history, in schools. And that’s part of our national history, and it’s something we can’t just throw away because it is part of our history.” Only after pushback from folks on social media and a statement from Lt. Governor Garlin Gilchrist did he finally make a hollow apology. And what did Senator Mike Shirkey – the Senate Majority Leader – do? Absolutely nothing.

Austin Blair would be disgusted.

And now, as has often been the case in American history, the burden of seeking justice and working toward real solutions has been pushed onto black people when those who are supposed to be leaders – like Mike Shirkey – take the side of the oppressor with their silence. While Sen. Shirkey stays in the shadows, real leaders like Sen. Erika Geiss and Sen. Sylvia Santana have stepped up, and called on Sen. Zorn to be censured and the Confederate flag to be banned from Capitol grounds because they know first-hand what that flag represents.

The Confederate flag is a racist symbol. It’s that simple. A quick google search will give you a brief rundown of its use through history. The confederacy used it as a symbol while fighting to keep slavery alive. The Ku Klux Klan began flying it in the 1950s and 1960s as a way to rile up white supremacists while terrorizing anyone who wasn’t a white Christian during the growing civil rights movement. Today, the flag is still flown at many white supremacist events displayed side-by-side with the Nazi flag.

Hopefully, you’re starting to get the picture.

Any display of the Confederate flag is nothing more than showing everyone your true, racist colors or at best shows a complete and total ignorance of what it represents. Even when slavery and racism were tolerated during the 1800s, Michigan pushed back. Our state abolished slavery and was admitted to the Union in 1837. Michiganders took in and hid slaves that were making their way towards freedom on the Underground Railroad. Many black activists chose Michigan as a place to settle – heroes like Rosa Parks and Sojourner Truth. When Governor Blair was asked to send one regiment of men to fight in the Civil War, he sent seven – all of whom were volunteers. Michigan has a rich history of fighting racism, and actions taken or lack thereof by people like Zorn and Shirkey who refused to acknowledge the dark history of the Confederate flag should not be ignored.

That flag has no place anywhere in this country, but flying one in Michigan, given our state’s history during the Civil War dishonors those who were terrorized by its colors and fought against what it stood for—and we all deserve better.