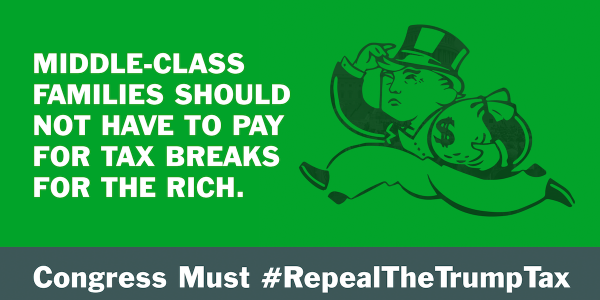 Today is Tax Day and a big topic of discussion has been the fallout from the GOP Tax Scam that was passed in 2017.

Republicans like Congressman Mike Bishop and Attorney General Bill Schuette have been singing the plan’s praises ever since it passed. They claim that the tax plan is benefitting working families.

But here’s the problem: it’s all a bunch of BS.

The fact of the matter is corporations, their CEOs and their Wall Street stockholders are the ones getting the lion’s share of benefit from the GOP Tax Scam mainly because that’s who it was designed to benefit.

Let’s look at the numbers:

4.3 percent: Only 4.3 percent of workers have reportedly received a one-time bonus or wage increase tied to the business tax cuts

9x: Corporations are getting 9 times as much in tax cuts as they are giving to workers in one-time bonuses and in wage hikes

39x: Corporations are spending 39 times as much on stock buybacks as they are spending on workers’ bonuses and wages.

$253 billion: Stock buybacks, which overwhelmingly benefit the wealthy, have increased by $253 billion since the tax law was passed, while workers are getting $6.5 billion in one-time bonuses and wage increases.

87 percent: 433, or 87%, of Fortune 500 companies have not said publicly whether they are giving any bonuses or wage increases to their employees due to their tax cuts.

10x: Fortune 500 corporations are getting 10 times as much in tax cuts as they are giving to workers in one-time bonuses and in wage hikes.

These numbers show that it’s the wealthy and the well-connected who are benefitting from the tax plan — not working families. On top of the financial gain the 1% are seeing, here are some numbers related to the fallout for the rest of us:

53 percent: this is how many working families will see a tax increase in the next 10 years because of the tax plan

$1 trillion: the amount the national deficit will increase because of the plan

13 million: the increase in the number of uninsured people over the next decade because of the tax plan

10 percent: the expected increase in healthcare premiums thanks to the GOP tax scam

The fact of the matter is, the GOP Tax Plan was not designed to help working families. It actually hurts them in the long run. The plan was designed for and by wealthy special interests and GOP elected officials let them have their way.