Do You Actually Know Why We Should Take A Knee? 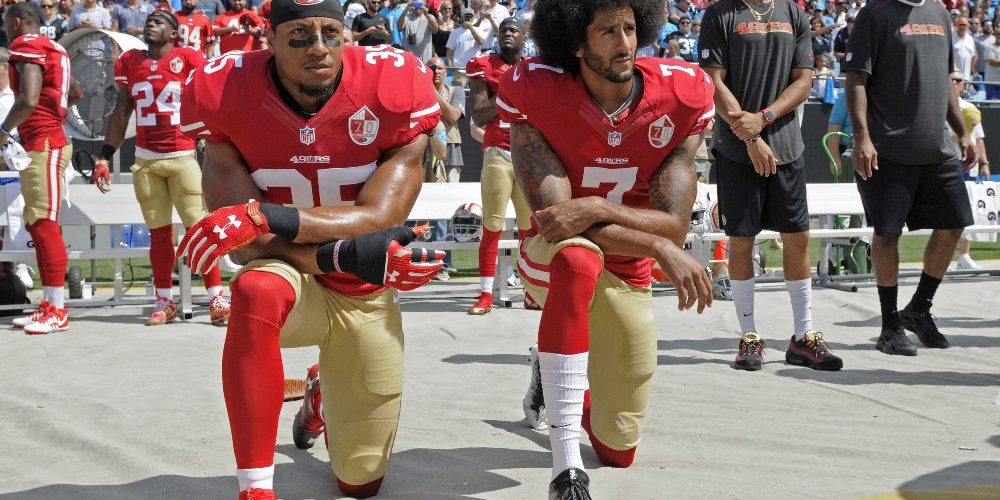 Just over a year ago, I wrote about why we were having the wrong conversation about Colin Kaepernick taking a knee. I talked about those who seek to prevent equity and justice commandeering conversations around these issues to make it about an unrelated issue, the aim being to show the marginalized groups in a negative, false light.

Sadly, we have arrived at that point again.

When I wrote the piece, Donald Trump was not in office. Colin Kaepernick had a job and was using his platform to bring light to the violence that Black people continue to face at the hands (and guns) of police officers in this country.

When Kaepernick began to take a knee and not stand for the Star-Spangled Banner, he described his action with this: “I am not going to stand up to show pride in a flag for a country that oppresses black people and people of color… There are bodies in the street and people getting paid leave and getting away with murder.”

Colin Kaepernick put his career on the line to call out a serious ill of this country, an ill this country has continued to be inflicted with, and refuses to take the medicine for, since its founding. One cannot help but to think back to the famous Black Power Salute photo of Black Olympic Medalists Tommie Smith and John Carlos, with Australian Peter Norman wearing a patch to support the human rights effort. All of those men faced scrutiny and were shunned after they used their platform to fight against injustices.

Yet the actions over the weekend with NFL owners locking arms with players, rebuking Donald Trump, leave me with a feeling of hollowness. Kaepernick remains unemployed; only one team brought up the injustices against people of color in their response; and I’ve yet to see those owners put their money where their mouths are in the way Colin Kaepernick has done. (Even while unemployed, Kaepernick has donated to the organizations fighting on the ground against police and state violence, and he has held community events with young Black kids).

If we are truly going to take a knee, we should be sure we are taking it for the right reason. We should take a knee and then some. We should fight against the violence that Black people face from the very people who are supposed to be protecting us. And we should speak truth to power instead of applauding the very folks who are punishing Colin Kaepernick for doing just that.