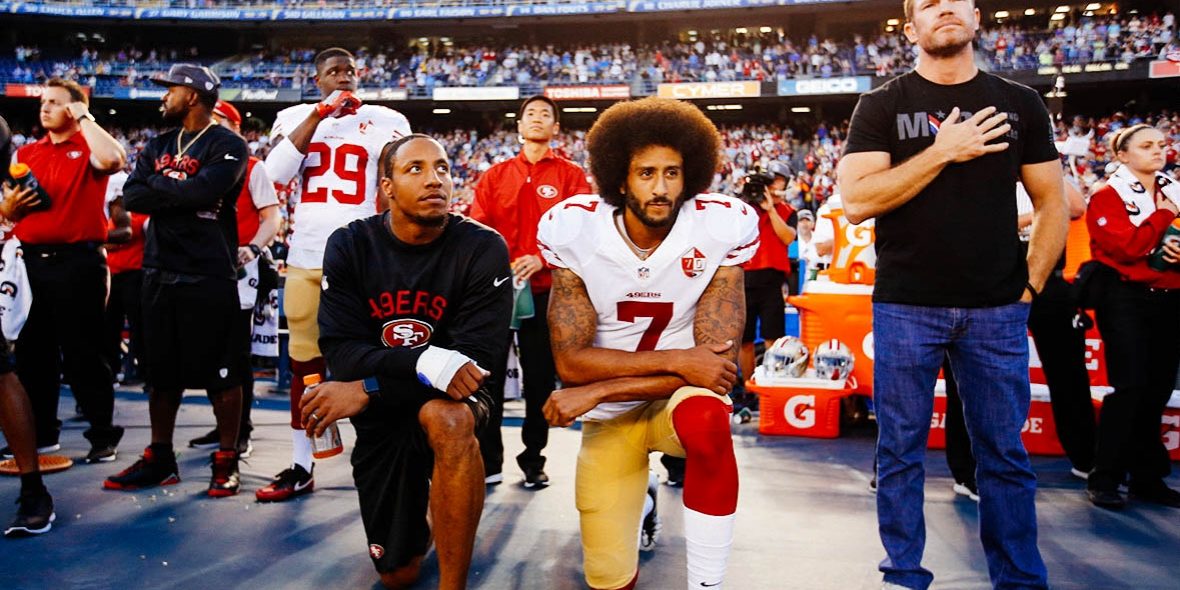 I am likely one of the most patriotic people you will meet, I grew up loving our country and all the symbolism that reflects America: the flag, the national anthem, the Fourth of July. I even carry a computer with a flag case on it and once when I was younger had USA shaved into our poodle’s fur to show support during Operation Desert Storm. At first, I will admit that I found myself conflicted about the Colin Kaepernick controversy. Though I am often outspoken, I stayed quiet while I reflected on my own thoughts. But I can’t be silent anymore as more and more black men are killed by police for things no more threatening than reading in their car or being stranded on the side of the road.

To me this all became pretty clear. The easy thing to say is that Colin Kaepernick is simply disgracing our military or our country because he refuses to stand for the national anthem. I support all of our veterans and current service members. I believe that our freedom and the greatness of our country are based in the everyday heroes who lay their lives on the line to protect this country we all love. But the real disgrace to all of our veterans isn’t not standing for an anthem, it is not standing up to the injustices being faced daily by black and brown people.

To me, the anthem and our flag represent the country we are meant to be, the country that accepts all people, the country where the American dream is a reality that we want all people to be able to achieve. Not one rooted in divisiveness and racism. Not one where people of color are being killed for things like a broken taillight, selling CD’s or for being racistly stereotyped to be a “big bad dude.” Indeed, we can shift the subject to make this about our veterans, but the simple truth is that it has nothing to do with our military and everything to do with the racist rhetoric that has been festering inside our politics like maggots on a piece of rotten meat.

Just a few days ago graffiti was found on a building at Eastern Michigan University. The letters “KKK” and words “N***ers go home” were spray-painted on the side of a college building. As the students protested peacefully, a truck plowed through them. This all happened less than 10 minutes away from my home.

I am sure many will disagree with my assessment, but I support Colin Kaepernick. At this point we should care more and be more focused on fixing the racial divide in the country that the anthem represents than we are about whether people stand for that anthem. America is great, but we’ve got work to do and I refuse to remain silent any longer simply because as a white man, I could. I saw a quote recently that hit home: “White silence is violence.” I will not be silent any longer and I hope that my white friends and colleagues won’t either.